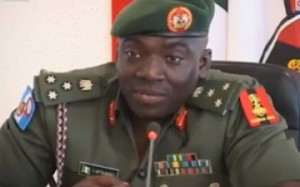 The Federal Government on Wednesday ordered the redeployment of military troops to Nasarawa State following a clash between two ethnic groups on Friday.

Speaking to journalists in Abuja, the Director, Army Public Relations Department, Ibrahim Attahiru, said the troops were sent to aid civil authority to prevent further escalation of violence to other parts of the state.

Several people were killed and thousands displaced after their houses were razed in the violence, now in its sixth day.

He said the deployment of the troops to the area had helped curb the spread of violence by the Ombatse and other ethnic militia groups in the state.

He also said that the federal and Nasarawa state governments are exploiting other ways of ensuring a quick return of normalcy in the state.

Recently, Nasarawa has become known for violent clashes either between militia groups or security forces and these groups.

A recent communal clash between the Ombatse and Alago tribes of Nasarawa State began on Friday and continued till Saturday, with the crisis extending to Obi Local Government Area main town and Assakio area of Lafia East.

Some youth spent the morning hours of Saturday attacking Obi Village after which they proceeded to Assakio without any hindrance from security agencies. They spent close to three hours in both towns, spraying petrol before starting fires, residents said.

About 30, 000 persons, mostly women and children within and around the affected areas, have fled to other parts of the state and neighbouring Benue State for safety.

Also speaking on a recent clash between soldiers and the dreaded Boko Haram sect in Kafiya forest of Borno state, Mr. Attahiru said the Nigerian Army had acted on an intelligence which led to the loss of 15 soldiers and one officer.

“On September, 12 troops from 81 Battalion under Division 7 Nigerian Army acted on intelligence report gathered that the insurgents had regrouped at Kafiya forest, in Ngazai Local Government Area of Borno State which is well fortified with anti-aircraft and anti-tank guns. Our troops launched a deliberate attack, over 150 insurgents were killed and the formation lost an officer and 15 soldiers,” Mr. Attahiru said.

He said on September 17, the aftermath of the insurgents’ defeat at Kafiya forest prompted an attack by some fleeing insurgents on Benisheikh Town, Kaga Local Government Area of Borno leaving many civilians killed.

He also noted that the troops located at the Forward Operating base in a repel attack cleared the town of insurgents and destroyed many equipment.

Mr. Attahiru further emphasized that the newly created Army 7 Division, headquartered in Maiduguri, had continued to carry out high tempo counter terrorism operations in Borno and its environs as terrorist camps in Kitumari, Kurunmati, Abali, Gajiram among others have been destroyed.

He said the Division had continued its work in the areas through aggressive mobile patrols of highways and major centers to facilitate quick return of normalcy in the states.