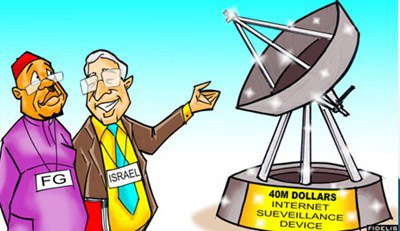 The bill will provide a legal footing for the federal government’s internet and phone spy program.

The Nigerian Senate, Wednesday, brushed aside public discontent with a secret federal internet and phone spy program, and gave an early approval to a legislation seeking to empower authorities to intercept electronic communications between, and from Nigerians.

On their second legislative day from a two-month break, senators voted in support of a second reading for A Bill for An Act to Provide for the Interception, Development And Protection of Communications Networks and Facilities For Public Interest And Other Related Matters, 2013.

If given a third reading eventually, approved by the House of Representatives, and signed into law by the president, law enforcement agencies will have the powers to monitor and seize Internet and phone data-including emails, text messages, phone records and more- from several millions of Nigerians, a privilege many Nigerians fear will be abused.

The law will be used in tackling terrorism, and ensuring that electronic communication from Nigerians are safe, the bill’s sponsor, Isa Galaudu, Kebbi North, said.

It will also criminalize interceptions by unauthorized persons, and will ensure the confidentiality of electronic communications.

“Consequently, the bill intends to provide for certain instances where lawful interception of communications data by law enforcement agencies shall be allowed while at the same time ensuring that privacy and confidentiality of communications of citizens is maintained,” Mr Galaudu said.

He said the plan will allow law enforcement agents block loopholes in the current laws that provide for no monitoring of or protection against such communication.

“Regrettably, the advancement of technology and the convergence of communication system have created a problem which aids terrorists and criminals to always keep a step ahead of the law in their nefarious activities,” he said.

“In most cases, these communications may be the only source for proving that individuals have been involved in such criminality and activities that threaten national security.”

The bill came months after PREMIUM TIMES uncovered the federal government’s secret $40 million contract to an Israeli technology firm, which will provide the technical infrastructure and the skill to snoop on the digital activities of Nigerians.

The clandestine programme, awarded to Elbit Systems, with headquarters in Haifa, will allow the government spy on citizens’ computers and Internet communications and emails under the guise of intelligence gathering and national security.

The project became public knowledge after PREMIUM TIMES worked out a veiled announcement of the contract in which Elbit acknowledged securing the multimillion dollar project with an African country whose identity it refused to mention.

The company got the contract without any competitive bidding as required by federal laws, triggering a House of Representatives resolution to investigate the deal. The House said in June the deal violated the Fiscal Responsibility law.

Makinde Olarotimi, the deputy chairman of the House Human Rights committee, one of the three committees mandated to probe details of the contract, told PREMIUM TIMES late July that the delay in the commencement of the investigation was due to the House’s attention on constitution amendment and the passage of the 2013 budget amendment.
He said the matter remained key to the House, and that it will be addressed once members reconvene in September.

“The motion came close to when we were going on recess; we had the constitution review and the budget which we considered as priorities. I’m assuring you that when we resume we are going to do justice to it for the good of all Nigerians,” Mr Olarotimi said then.

The government initially considered terminating the contract after Elbit’s discreet announcement, accusing the company of breaching confidentiality agreement as evidenced in the PREMIUM TIMES’ report.

It is not clear though whether the Senate proposal was directly anchored on the Elbit contract. But the bill, first read June 6, 2012, will undoubtedly provide the needed legal basis for such programmes.

Amongst other things, the law, when effective, will provide for protection of communication against abuse, prohibit unauthorized interception except for public interest, ban manufacturing, assembling, processing, and selling of equipment used illegally as interception devices.

Atai Aidoki Ali, a senator from Kogi state, said the bill might allow government witch-hunt opposition without a court order. He said the bill is “ambiguous”.

But Deputy Senate President, Ike Ekweremadu, said the government has to deploy unusual methods at an unusual time, to protect the people.

“The security and protection of our citizens is paramount; this is the major aspect of the bill,” he said. “It is also important to stop people using devices to intercept people’s calls. I think with this bill, punishment will be prescribed for those who intercept calls illegally.”

My Struggle, My Dreams, By Femi Fani-Kayode