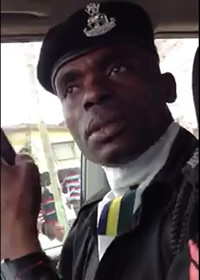 Dismissal of “bribery” policeman not too harsh – IG

The Inspector General of Police, Mohammed Abubakar, has rejected concerns that the prompt dismissal of a police officer caught on tape asking for bribe, was too harsh.

Mr. Mohammed said he will not oversee a corrupt police, instead will continue to fight against corruption in the force.

He said apart from the regular warnings issued to the officers of the force, authorities have also deployed different strategies to discourage corruption in the service including staging officers up to test their ethical standards.

The IG was speaking in reaction to the claims in some quarters that the dismissal of the police officer caught receiving bribe in Lagos State was too harsh.

Sergeant Chris Omeleze was dismissed after being caught on camera trying to extort the bribe from a motorist who was leaving Lagos international airport. His victim had managed to record the encounter and put the video online drawing 117,500 hits on YouTube.

Speaking with journalists at the State House Abuja, after a Sallah visit to President Goodluck Jonathan on Thursday, the IG said his tenure as the head of the police force will not condone such corruption.

“There is a process that is going on. If the man who … that corruption has taken place is willing and ready to come and give evidence in court, he would be charged to court,” he said.

Responding to claims that the dismissal decision was harsh, the IG said “For somebody who is corrupt, I will not run a corrupt police service.”

On the call for the Rivers state commissioner of police, Joseph Mbu, to be transferred out of the state, the police boss said a professional police officer is not a politician and cannot be drawn into politics.

He added that Mr. Mbu has been charged to be a professional police officer providing safety and security for Rivers State.

“The situation is okay. We are not politicians, we cannot be brought into the politics of this country. Professional police officers are supposed to do what they are supposed to do to protect lives and properties and that is why we remain where we are and we charge the commissioner of police to be a professional police officer providing safety and security for the good people and development of Rivers State,” he said.

He thanked Almighty Allah for His mercies and Nigerians for their support to ensuring peace in the country.

“We shall continue to pray and I want to use the opportunity to thank Nigerians for their support, for their cooperation, for their partnership in fighting crime and criminality in this country. And equally, to thank our officers and men of the Nigerian Police and other security agencies for these collaboration and partnership, we want to thank the media for their support in the fight against criminality.”