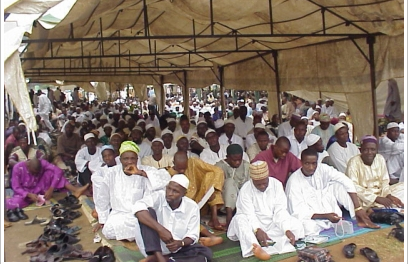 “…honourable and dignifying child marriage is better than child prostitution.”

The Muslim Rights Concern (MURIC), a Non Government Organisation, has called for tolerance on the controversy concerning child marriage.

MURIC’s Director, Ishaq Akintola, made the call in a statement issued on Wednesday in Ibadan.

The statement said that in conformity with the tenets of Islam, age was not part of the conditions which must be met before marriage could be solemnised.

It said that where the bride was a ‘minor’, Islam prescribes protective solemnisation of marriage to shield the bride from abuse.

“This means that the girl who is deemed to be of tender age is left untouched by the man until she attains puberty.

“Another major condition for child marriage is that the girl herself has the right to repudiate the marriage when she attains maturity if she does not like her spouse.

“MURIC believes that honourable and dignifying child marriage is better than child prostitution which is rampant in Nigerian cities and red light zones,’’ it said.

The statement compared the globalisation and promotion of homosexualism, lesbianism and same-sex marriage as a direct challenge to God’s divine order.

The Senate, on the recommendations of the Constitution Review Committee, rejected the deletion of the clause on renunciation of citizenship.

The Chairman, Senate Committee on the Review of the 1999 Constitution, Sen. Ike Ekweremadu, said that the clause was recommended for deletion because it was considered discriminatory.

He said the clause, which had been in the Constitution since 1979, had nothing to do with child marriage as was being insinuated by some Nigerians.

FG partially bans augmentation of contract sum beyond 15 per cent