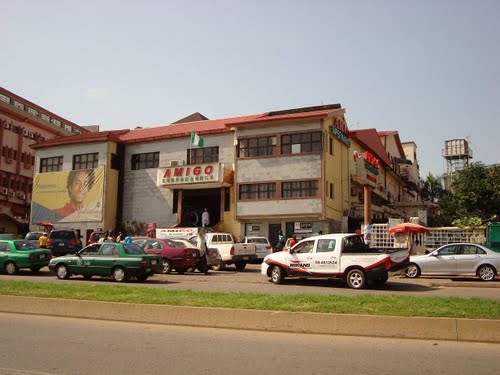 The JTF said Fauzi Fawad is on the run.

Nigerian security agencies have linked a co-owner of two major ongoing businesses in the nation’s capital as a ring leader in a major terrorist operation in the country.

In a statement by the spokesman of the Joint Task Force in Kano, Ikedichi Iweha, Fauzi Fawad, the co-owner of Amigo Supermarket and Wonderland Amusement Park, was named as a member of a Lebanese Hezbollah terrorist cell in Nigeria.

Wonderland is Abuja’s biggest and most popular amusement park, while Amigo is one of the largest supermarkets in the Nigerian capital.

The JTF said Mr. Fawad’s name was mentioned by “all those arrested,” for being in possession of heavy weapons, and other terrorism related activities.

Mr. Fawad is now on the run, the JTF said.

The JTF said it arrested three Lebanese suspected of owning the large cache of arms recovered at a bunker in the city.

The Brigade Commander, 3rd Brigade, Nigerian Army, Iliyasu Abba, said one of the suspects was arrested on Tuesday at a house on Gaya Road in Bompai area of Kano.

He said another suspect was arrested in Abuja while the third suspect was apprehended since May 16, at Aminu Kano International Airport, on his way to Beirut, Lebanon.

“The one arrested at Malam Aminu Kano International Airport had a sum of 60,000 US dollars in his possession”.

He said one Abdullahi Hassan Tahir Padalla, who was the owner of the house in which one of the suspect was arrested was still at large.

“What you are seeing here are weapons of mass destruction in terms of our situation here right now in Nigerian.

“If these things have been brought out only God knows the type of destruction they will cause to innocent persons in the state or in the country,’’ he said.

He said the Department of State Security Service (SSS) in Abuja had been investigating the case for long.

In a remark, the state Director of the SSS, Bassey Ettang, said that the three suspects had a link to the Hezbollah group in Lebanon.

He said the suspects have for a long time been using the bunker in the house to stockpile arms and ammunition.

He restated the commitment of the SSS and other security agencies to continue with the ongoing war on criminals nationwide.

Read the full military statement implicating the Abuja businessman below:

On 28 May 13 a combined team of the JTF involving the NA of the 3 Brigade here in Kano and the Kano state DSS conducted a thorough search of this house located at No 3 Gaya Road off Bompai Road Kano belonging to one Abdul Hassan Taher Fadlalla a Lebanese national who is currently out of the country. After painstaking search of the whole premises, the search team uncovered an underground bunker in the the master bed room where a large quantity of assorted weapons of different types and caliber were recovered.

The bunker was specially constructed for this purpose. It is worth mentioning to say that the weapons include anti tank weapons, rocket propelled guns, anti tank/anti personnel mines among other dangerous weapons.

All the weapons and ammunition recovered were properly concealed with several layers of concrete and placed in coolers, drums and bags neatly wrapped.

These discoveries were not accidental but the outcome of an ongoing robust counter terrorism investigation by the Department of the State Services Abuja in the past several months. The investigation also confirms the existence of a Hizbullah Foreign Terrorist Cell in Nigeria. Consequently, the DSS on 16 May 2013 arrested one Mustapha Fawaz the co-owner of the popular Amigo Supermarket as well as the wonderland Amusement Park all in Abuja. Thus, his arrest and confession unveiled other members of the foreign terrorists network which led to the interception of one member of the syndicate named Abdullah Tahini a Lebanese national at the Mallam Aminu Kano International Airport with undeclared amount of sixty thousand United States Dollars on him enroute Beirut. Thereafter on 26 May 2013 one Talal Roda also a Lebanese with Nigerian Passport was arrested in this same house.

All those arrested have confessed to have undergone Hizbullah terrorist training and further implicated one Fauzi Fawad, also a co-owner of Amigo Supermarket and wonderland Amusement Park. However, the fellow is now at large. The arms and ammunition were targeted at facilities of Israel and Western interest in Nigeria, however, the security agencies are making frantic efforts to unveil the true situation. At the end of investigation, all those involved will be prosecuted.

Tortoise Hypothesis: How the Opposition Will Re-Elect Jonathan in 2015, By Bolaji Eletta