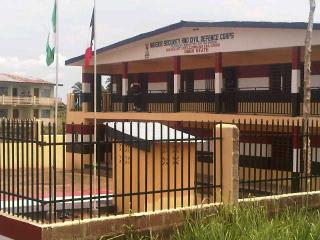 The NSCDC said it has successfully reduced the activities of vandals in Nigeria.

The Nigeria Security and Civil Defence Corps, NSCDC, boasted that it has successfully reduced activities of vandals by dislodging some of their hideouts in various parts of the country.

The Commandant General of the Corps, Ade Abolurin, made this known at the opening of an office complex donated to the corps by the traditional ruler of Awa-Ijebu, Abib Awobajo, in Ogun State.

Mr. Abolurin said the corps has reduced the rate of vandalism in Nigeria by dismantling some major hideouts in the country especially in vandalism prone areas in Ondo, Abia and Ogun State.

He explained that the destruction of the hideouts came as a result of surveillance and intelligence report gathered on vandalism activities in the areas including Magboro/Arepo axis areas of Ogun State.

The commandant further stated that the corps had, in recent past, destroyed some illegal refineries in the Eastern parts of the country.

Mr. Abolurin said the amount which the country loses to vandalism related activities is worrisome and it impacts negatively on the economy. He added that if the money was channeled towards other developmental programmes, the standard of living in Nigeria would have improved.

The Commandant General, who was represented by Assistant Commandant General, zone F, Oladapo Amujare, thanked the monarch and people of Awa-Ijebu for their support and donation of the gigantic office complex which is meant to serve as an Ogun East Area Command of the corps.

The office complex was commissioned by the Ogun State Governor, Ibikunle Amosun, who was represented by Laide Osifeso, the Chairman of Ijebu North Local Government Area.

He said that the state will continue to assist security agencies in Ogun State in other to create a conducive environment for investors, adding that the state had invested a lot on security because sustainable development can only thrive in secured environment.

While welcoming the guests, the donor town traditional ruler, Abib Awobajo, thanked his people for their unflinching loyalty and support for him.

He explained that the donation was their little contribution towards effective security. The structure which has twenty-four offices is also equipped with a security fence, toilets, pipe borne water, among others.

The office is located along Awa/Ibadan Expressway.