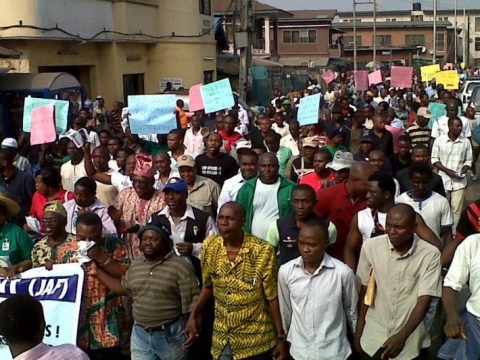 About 2,400 respondents participated in the survey.

A vast majority of Nigerians want the federal government to continue to subsidise petrol, a survey conducted by three non-profit organizations has stated.

The survey revealed that over 60 per cent of 2,400 respondents believe that there is need for the subsidy to remain.

The Federal Government in January 2011 announced the removal of petrol subsidy leading to protests across Nigeria. The government eventually rescinded its decision and instead implemented a partial subsidy removal. The price per litre of petrol went up from N65 to N98 after the partial removal, although it would have been over N140 if the full subsidy withdrawal was implemented.

President Goodluck Jonathan has repeatedly said Nigerian economy cannot sustain payment for subsidy and reiterated his long term plan of total removal, which he explained will be done in phases. Nigeria spent over N1 trillion on petrol subsidies in 2012.

The Executive Director of CLEEN Foundation, Kemi Okenyodo, said the research was organized by the CLEEN Foundation in collaboration with the Afrobarometer Network, and the Center for Democratic Development CDD-Ghana. The result was presented at a press briefing on Wednesday in Lagos.

“The Afrobarometer (AB) is a comparative series of public opinion surveys that measure public attitudes toward democracy, governance, the economy, leadership, identity, and other related issues.

“The AB is an independent, non-partisan, African-based network of researchers. The first round of surveys took place in 1999-2001 in 12 countries. The Network has conducted “Round 5” surveys in up to 35 countries including Nigeria during 2011-2012,” she said.

The official said 2,400 respondents were interviewed in their homes using personal face-to-face interview and multi-stage sampling technique. To ensure adequate representation of adult Nigerians population, probability sampling procedure was used to neutralize any known form of bias that may affect the findings of the study.

Respondents were males and females, aged 18 years and above.

Interviews were conducted throughout week days and weekends, to ensure that respondents of all works of life were included in the sample.

Ms. Okenyodo added that the purpose of Afrobarometer survey in Nigeria is to measure popular perspectives on the social, political, and economic environment. The goal is to give the public a voice in policy making processes by providing high-quality public opinion data to policy-makers, policy advocates and civil society organizations, academics, media, donors and investors, and ordinary Africans.

“We went to the greatest length in quality control measures in order to ensure that the process of collecting and analyzing the data we are presenting today adhered to the highest possible international standard in reliability.

“The field administration of the survey questionnaire in Nigeria was handled by the Practical Sampling International (PSI), a reputable social research firm that has worked with the CLEEN Foundation and the

Afrobarometer network over the years and has conducted similar surveys for local and international organizations,” she said.

The survey focused on five areas which include election, rotation of the presidency across the geo-political zones, creation of more states, corruption, and fuel subsidy.

“62 per cent of Nigerians say government should maintain the fuel subsidy,” Ms. Okenyodo said while announcing the results.

“The Nigerian public have the belief that creation of more States and Local government Areas will improve development of the country. 60 per cent of Nigerians approve the rotation of Presidency across regions against 40% who say anyone should contest for the office of the presidency regardless of the region; while majority of Nigerians say the quality of the 2011 general election in Nigeria is better than 2007 national elections.

“Also, wide majority of Nigerians say government officials benefit most from fuel subsidies and most Nigerian residents say it is difficult to start-up a small or medium scale business in Nigeria,”

Miss Okenyodo said. Kathy Addy, the representative of Center for Democratic Development (CDD), Ghana, stated that the research assists government in formulating policies that will prioritise the needs of the people.

“The first round of surveys took place in 1999-2001 in 12 countries. The Network is now conducting “Round 5” surveys in up to 35 countries including Algeria, Burundi, Cameroon, Cote d’Ivoire, Egypt, Guinea, Mauritius, Morocco, Niger, Togo, Tunisia, Sierra Leone, and Sudan during 2011-2012.

“The goal is to give the public a voice in policy making processes by providing high-quality public opinion data to policy-makers, policy advocates and civil society organizations, academics, media, donors and investors, and ordinary Africans,” she said.

The Senior Special Assistance to the Attorney General and Commissioner for Justice in Lagos State, Gbolahan Adeniran, applauded the researchers stating that the Lagos State Government has benefitted immensely from unbiased scientific researches geared towards meaningful developmental policies and implementation.

The research funders include the DFID, SIDA, USAID and the Mo Ibrahim Foundation.