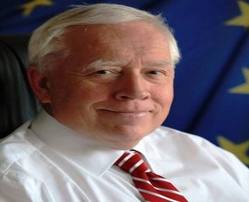 Atiku’s AUN appoints EU ambassador to Nigeria into management board

David MacRae is EU’s Ambassador to the Commission of the Economic Community of West African States, ECOWAS.

The American University of Nigeria, AUN, founded by former Vice President, Atiku Abubakar in Yola has appointed the retiring head of delegation of the European Union, David Macrae, as the Executive Vice President of University Relations and Development of AUN.

A release by Abba Tahir, the university’s spokesperson, on Thursday said the appointment takes effect from October 1, 2013.

Mr. Macrae is currently a member of the Board of Trustees of the AUN.

“We are honored and delighted that Ambassador MacRae has agreed to join our executive team,” said AUN President, Margee Ensign.

“As a member of the Board of Trustees since 2011, Ambassador MacRae has provided us with invaluable counsel and support. His reputation, in-depth knowledge of Nigeria and commitment to AUN has been and will continue to be of enormous benefit to the University. As Executive Vice President of University Relations and Development, he will play a key role at AUN, whose mission is to be the first Development University in Africa,” she said.

According to Ms. Ensign, Mr. MacRae recently spearheaded a 5-year plan aimed at improving governance, public service delivery and acceleration of progress throughout Nigeria with the support of the World Bank, UNICEF and Nigerian state governments.

She also noted that the former ambassador “understands the myriad challenges faced by this young democracy (Nigeria).”

Mr. MacRae said he is looking forward to expanding his role at the University.

“Nigeria and the EU share common values and ideals; both believe in peace and security, equality, democracy, and tolerance as ways of developing prosperous and generous societies. I look forward to working with Dr. Ensign and this impressive University which supports and shares these important values,” he said.

Mr. MacRae holds an Honorary Doctorate Degree from AUN and inaugurated AUN’s Diplomats Lecture Series. Before coming to Nigeria in 2010, he served for five years as Ambassador and Head of the EU Delegation in Rwanda. He is also the EU’s Ambassador to the Commission of the Economic Community of West African States, ECOWAS.

“It’s good to be back to Nigerian Sports” – Gbenga Elegbeleye