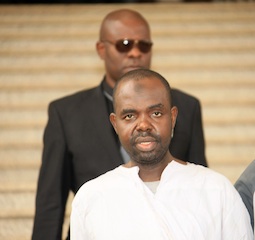 Justice Adeniyi Ademola of the Federal High Court on Tuesday fixed May 15 to give ruling on the admissibility of five documents tendered as confessional statements made by Mustapha Umar.

He was brought to the Force Criminal Investigation Department, Area 10, Garki, Abuja, after his arrest in Kaduna on April 26, 2012.

Testifying Tuesday,  a prosecution witness, Simon Labaran, said the suspect wept profusely several times in regret that he did not die in the blast. Mr. Labaran said Mr. Umar kept lamenting that he would have made heaven if he had died alongside other victims of the blast.

The witness said, “I was serving in Force CID Area 10, Abuja, as a detective in charge of investigation of terrorism cases.

“On April 26, 2012, the accused person was brought from Kaduna and handed over to me for discreet investigation.

“The accused person was involved in the bombing of ThisDay office (in Kaduna).

But the defendant’s counsel, Sullyman Nurunee, objected to the admissibility of the five statements credited to his client.

At a trial-within-trial session granted by the Judge, the prosecution witness, who claimed the supervision of the statement taking, said the accused person was not coerced or beaten in the process.

The witness, a police investigator in charge of the Investigation and Terrorism Unit of the Special Anti Robbery Squad (SARS), Abuja, said the accused voluntarily gave the statements.

He explained that the accused was handed over to him with serious injury he sustained from the scene of the bombing, adding that “nobody in his right senses could have mistreated him”.

“My Lord, we treated him well. In fact, I was compelled to call the medics to attend to him from time to time when he was with us.

“We got the statements from him through mere discussion and he was friendly and cooperative,” he said.

While giving evidence, Mr. Umar said the police did not officially record any of his discussions with them as his statements, saying “I did not sign any documents as my statements’’.

“My Lord, the only thing I know happened while I was with the police was that I was hung and beaten, all in attempts to extract information from me.

“I told them that I could not reveal anything because I did not have such information.

“They told me I was a terrorist and a bomber. My Lord, I am only a petty trader that deals in perfume and traditional Hausa caps.

“I was indeed surprised when the police said I made five statements with them. Those are not my statements,’’ he said.

The police brought a one-count charge against Umar under the Terrorist Prevention Act 2011.

ThisDay office in Kaduna was bombed on April 26, 2012, by a suspected suicide bomber.

The accused was on Feb. 3 arraigned for allegedly masterminding the bombing of the Newspaper House.

Mr. Umar, who had pleaded not guilty to the charge, risk being sentenced to life imprisonment, if found guilty.

Paying the Police a Livable Minimum Wage, By Ogaga Ifowodo