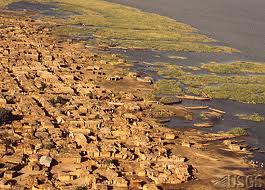 The lake is shrinking rapidly.

The Lake Chad water transfer project aimed at restoring the water body to its normal level is likely to begin in 2017, Sanusi Abdullahi, the Executive Secretary, Lake Chad Basin Commission (LCBC), has said.

Mr. Abdullahi said in Abuja on Monday that the commission had rolled out a five-year investment plan geared towards preparing grounds to actualise its target.

The lake, which covered an area of approximately 22,000 square kilometres in the 1970s has shrunk within a few years to 2,500 square Kilometres.

The project, through water contribution from the Congo River Basin, is intended to boost the receding lake to its previous size thereby allowing navigation at any season from Lake Chad to Oubangui in DR Congo.

He said that the commission might start the project in 2017 or 2018, considering economic, political, technical and environmental factors.

“This five-year investment plan is tailored towards preparing the grounds for the actual issue of the transfer of water from the Congo to Lake Chad,” Mr. Abdullahi said.

“There are two major existing rivers in this area that bring in water to Lake Chad — the Chari River and the Logone River. We want to improve these river systems to be able to cope with the additional flow of water.

According to him, if adequate precautions are not taken to strengthen the river bank when there is heavy flow of water, it might cause flooding.

Mr. Abdullahi said the commission would also embark on capacity building for stakeholders in addition to the implementation of the investment plan. He said that it had become expedient for the commission to build the capacity of rural populace to absorb important information required for their safety.

“We will have to sensitise and assure them of our real commitment, political commitment and seriousness of the governments of the member countries to relocate these people,” he said.

“Water is meant to give them life; equally we want to bring in water but we want to ensure that our people are safe and healthy and they know what we are doing and they consent to it because it is in their own interest.’’

The executive secretary explained that all technical and environmental aspects of the project would be taken into cognizance to ensure the success of the project.

Mr. Abdullahi stressed that the commission would do everything possible to address all aspects and concerns of the people and those of the donor partners. He said the decision of the Heads of State and Government of the Chad Basin Commission at their 14th summit in 2012 to carry out environmental study was to allay the fears of the Congo citizens.

He also said that if there were negative environmental issues that were not properly addressed, they would affect the success of the water transfer project.