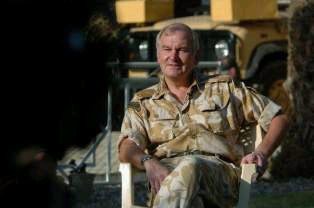 The lecture will be delivered in Abuja on Wednesday.

A Former Deputy Commanding General of the Multinational-Force in Iraq, Robert Fry, has arrived Nigeria to deliver The Africa Lecture 2013 – the lecture series of the pan-African news magazine, Africa Today.

The Publisher of the Magazine, Kayode Soyinka, who made this known to PREMIUM TIMES, said the Lieutenant General’s lecture topic would be: “The Relevance of Special Forces in Contemporary Military Operations.”

He added that the lecture, taking place in Nigeria for the first time since it was inaugurated in 2002, will take place at Nigeria’s top military academy, the National Defence College (formerly War College) in Abuja, on May 16, and will be attended exclusively by top military officers from Nigeria and other African countries and members of the diplomatic community.

Mr. Soyinka said he was delighted that such a top military administrator as Robert Fry is delivering the distinguished lecture this year “particularly on a topic relevant to the security challenges that Nigeria is presently facing,” pointing out that this way, “he can bring his experiences and link them with our current challenges in Nigeria and the sub-region.”

The renowned international journalist explained that when The Africa Lecture series was inaugurated by Africa Today in 2002, it was with the intention that the person who would give the annual lecture should be a personality of high moral standing and celebrated for his or her transparency.

‘The distinguished lecturer should always be an international personality who is involved in Africa’s tortuous march towards democracy and good governance. A distinguished Commonwealth and Oxford-educated former Rhodes scholar and vice chancellor of the University of the West Indies, in Jamaica, Professor Rex Nettleford, delivered the inaugural lecture,” he said.

He emphasised that Africa Today therefore felt very highly honoured that Mr. Fry is delivering the 2013 edition especially in Nigeria.

However, in similar vein, the Deputy Commandant and Director of Studies at the National Defence College, Major-General Muhammad Inuwa Idris also said: “It is a great honour for us to host Lt. Gen. Robert Fry at the National Defence College to deliver The Africa Lecture this year.‘Drawing from his vast knowledge and experiences in different conflict areas around the world will no doubt be of great benefit to our College, and especially our officers, as we deliberate on strategies and new ways to confront the security challenges we are facing both as a nation and within the sub-region, most especially in Mali and The Sahel.”

While in Nigeria, General Fry will also participate in a strategic communications workshop with ECOWAS and the commanders of AFISMA/MINUSMA force that is soon to enter Mali. He will also pay courtesy calls on government ministers and service chiefs.

The Africa Lecture is supported and sponsored this year by the National Defence College in conjunction with Albany Associates (UK).

Mr. Fry was until his retirement in 2007 the Commandant of UK’s Royal Marines.