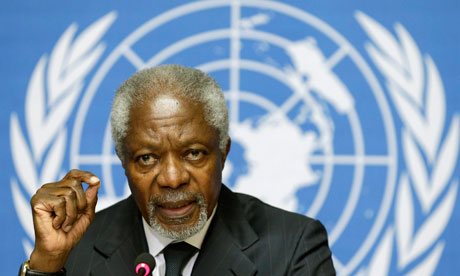 Kofi Annan succeeds Desmond Tutu as Chair of The Elders

The group was formed by Nelson Mandela in 2007.

Former United Nations Secretary-General, Kofi Annan, has been appointed Chairman of The Elders, replacing South Africa’s Desmond Tutu who had chaired the group since it was founded by Nelson Mandela six years ago, the elite group said in a news statement on Friday.

In the statement, the group said that the former UN Secretary-General and Chairman of the Kofi Annan Foundation, would take over from Mr. Tutu

It said the decision was unanimously reached by the Elders at their latest biannual meeting in Ireland this week. Gro Harlem Brundtland, former Prime Minister of Norway, will become Deputy Chairman of the Organisation.

It explained that Mr. Tutu, Chairman of The Elders since formation in 2007, had announced his intention to step down, adding that Mr. Tutu will remain as an honorary Elder.

“I am honoured and privileged to have been chosen by my fellow Elders to succeed Desmond Tutu as Chairman of such a distinguished set of individuals. I am also very grateful that Gro Harlem Brundtland – with whom I’ve worked closely at the UN – has accepted to join me as Deputy Chairman,” the statement quoted Mr. Annan as saying.

Mr. Annan added, “Together, our group of Elders possesses a considerable amount of international experience, but to apply this collective knowledge in the most effective way remains daunting.”

He stressed that the young foundation would continue to grow in its ability “to inspire compassion, ethical leadership and a belief in the undying hope which Desmond Tutu, throughout his life and as our Chairman , has always championed.”

The outgoing chair, Mr. Tutu, said, “As Elders we should always oppose Presidents for Life. After six wonderful years as Chairman , I am sad to say that it was time for me to step down. I am looking forward to spending more time with my family.

“I am very fortunate to have become friends, over those years, with some of the world’s outstanding leaders. They are exceptionally generous and magnanimous people. It has been mind-blowing, for a former ghetto urchin like me, to have them sit under my gavel.”

Mr. Tutu described Mr. Annan as “a brave, humble and dedicated leader. I have no doubt that he will steer this group to new heights. And with Gro as his deputy, there will truly be no stopping us!”

The Elders is a group of independent leaders using their collective experience and influence for peace, justice and human rights worldwide.