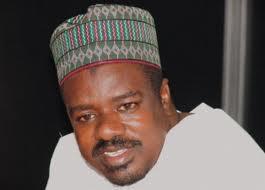 The governor is on the run.

A Federal High Court in Dutse, the Jigawa capital, has issued a warrant directing the Inspector General of Police or his officers and the Economic and Financial Crimes Commission, EFCC, to arrest Saminu Turaki, former governor of Jigawa State and bring him before the court.

Justice S. Yahuza gave the order on Friday after Mr. Turaki failed to appear before the court. The EFCC had earlier declared him wanted.

“You are hereby commanded to arrest the said Ibrahim Saminu Turaki and bring him before me at Federal High Court, Dutse, Jigawa State without delay”, the court ordered.

The EFCC is prosecuting the former governor over a N36 billion theft and money laundering crime he allegedly committed when he was governor.

The last known address of the accused who contested for senate in 2011 on the platform of the Action Congress of Nigeria is No. 16, Dennis Osadebe Street, Asokoro Villa, Abuja.

The EFCC said it implores “anyone having useful information about the whereabouts of the suspect to notify its offices in Kano, Gombe, Abuja, Port Harcourt, Enugu and Lagos or report at the nearest police station.”