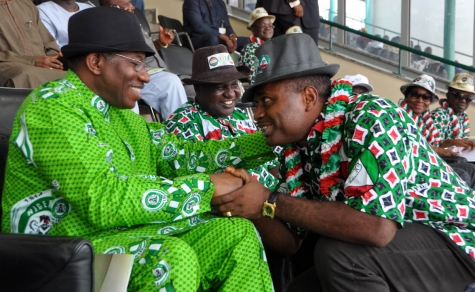 The president chided labour leaders and asked them to tackle graft from within.

President Goodluck Jonathan, Wednesday, derided the Labour unions saying many of its members at all levels engage in high level of corruption despite their clamour for good governance.

“Labour has been in the fore front for the demand of good governance and increase action against corruption and these issues are being vigorously tackled from various fronts. Prosecutions are being pursued in matters arising from petroleum subsidy fraud, embezzlement of pension fund and other serious long-standing malpractices demystified by this administration.
“Given that some of these perpetrators are senior and junior members of labour unions, greater attention to peer review action on the part of labour will be much more appreciated”, the President said.

While speaking at the Eagle Square, venue of the March past and other ceremonial activities to mark this year’s Workers Day, the president said that though his administration was far from achieving a buoyant economy, intervention moves are ongoing.

“Yes, we have not gotten close to where we want to be but there is a major intervention going; diversifying the economy away from oil sector to agriculture, housing, manufacturing, creative industry, and other sectors that generate jobs and grow the economy has long been a national goal and today, our government is actualizing this as a major as another fundamental goal of its transformation agenda,” he said.

Despite poor performance rating at several polls including the April 2013 NOI polls, the president said there have been successes in his ongoing transformation reforms.
“As a result of our economic policies, there has been significant improvement in our economic fundamentals. Our economy grew by about 6.6% last year and it is set to grow at a similar pace this year. Considering the global economic recession, the projected growth of 6.6 is quite significant. We have further reduced our fiscal deficit in the 2012 budget to 1.8% of GDP and cut domestic borrowing.

“We have rebalanced our spending in favour of capital expenditure, the rate of inflation also dropped to a single digit territory at the beginning of this year at a time many advanced and emerging markets are being downgraded. Our sovereign credit rating had been upgraded,” Mr. Jonathan said.

He admitted that the economic achievements recorded by his administration would be meaningless if they don’t impact positively on the living condition of Nigerians.
“We are, however, not unmindful of the fact that the ultimate benefit of this current result must reflect in the lives of the citizens. I agree totally that until we create jobs, until Nigerians can wake up and find food to eat, until Nigerians sick can walk to the hospitals and get treatment, the economic indices may not mean much to us,” he said.

The president said his administration is focused on economic inclusion “with articulated strategy targeting the disadvantaged and unemployed in our society with economic opportunities in agriculture, entrepreneurial support, graduate employment and unskilled job programmes.”
He said his administration is also building robust safety nets programmes targeting pregnant mothers and children in the health sector through YouWin programme.

“We are supporting talented young men and women to set up their business so that they will be able to employ others. We want to create our future billionaires, our industrial giants through that programme. Our port reforms ensuring efficiency in the handling of ports and related business and achieving 48 hours time clearance for cargoes,” he said in his May Day speech.

On Power, Mr. Jonathan said, “In the power sector, the inevitable and painstaking task of correction, construction and consolidation is on course with the privatization of our electricity generation and distribution companies and of course, you witnessed. With that window, the power sector will begin to grow rapidly. Our rail, airports and major roads are being intervened. For those of you who travel across the country, you will appreciate that”.

“I am pleased to join you on this important day of solidarity with workers around the country. I salute all our hardworking men and women who toil daily- from sunrise to sun set- for the progress of our great nation. Over the years, through your invaluable contributions and sacrifice, we have achieved significant reforms in our economy and national life.

“The struggle of workers around the world has indeed come a long way. Since the first day of May was designated International Day of Workers in 1904, here at home, historical development of Nigeria as a nation is closely linked to the history of trade union movement. The recognition of the Nigerian Civil Service Union by the British Colonial government as the first trade union in the nation in 1912, set the pace for workers rights awareness and the bravery and principle agitation that manifested in the Aba Women’s riots of 1929, coal miners strike of 1949 and several other workers legitimate demands for economic justice.

“As Nigerians organized rallying points for mass interest, these movements strengthened the nationalistic struggle for independence and provided the bedrock for a national labour platform as today represented by the Nigerian Labour Congress. Who can forget the dedication of all the teachers unions, the perseverance of the association of civil servants, the picket lines of the road transport workers or the resilience of the textile union workers and indeed, the solidarity and sacrifice of so many others which has enabled the hope we have today as a nation.

“On such occasion, we can retrack back and remember later Comrade Michael Imuodu, the labour leader number one and also late Paschal Bafyau who was with us. May their souls rest in peace.
“We can also remember some of our labour leaders who are also working hard. Comrade Hassan Sumonu, who is in Addis Ababa representing our collective interest and of course, my good friend Comrade Idris Omar and Comrade Peter Esele”.

“This year’s Labour Day can rightly be described as Centenary Labour Day as it coincides with the 100 year of the amalgamation of the northern and southern Nigeria to the present modern day Nigeria we know.
“This year’s commemoration appropriately affords special reflection and accord special recognition to the historical and contemporary importance of the labour movement in the national project.

“I have been following up your activities within the week that have been lined up to make Nigerians look at the labour in the last 100 years with the theme, a Centenary Journey of Service and Struggle.

“The Federal Government will continue to associate with you and play our role whenever you call us to do. The Nigerian worker is not only an important part of our history but a pivot of our past, our present and our future. That is why we are leaving no stone unturned towards the practical enhancement of the welfare of all workers in both the private and public sector and in facilitating better relations with employers and government.

“Since the advent of this administration, our actions and policies have been geared towards placing the country on the path of sustainable progress where everyone can better achieve his or her dream. That is the thrust of our transformation agenda”.