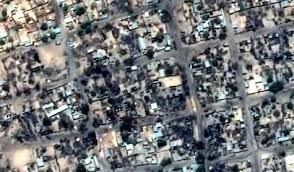 Contrary to the claim by Nigerian military that only 30 houses were destroyed in a military raid in Baga, Maiduguri on April 16 and 17 after a soldier was killed when members of insurgent Boko Haram attacked an military vehicle, satellite images obtained by Human Right Watch has revealed “massive destruction of civilian properties.”

A statement released by the organisation said it identified 2,275 destroyed buildings, majority of which are likely residential, with another 125 severely damaged.

Human rights Watch said its findings corroborate claims by the residents of the town that “counted 2,000 burned homes and 183 bodies” immediately after the attack.

The organisation said the discrepancy in the figure given by the military and the its findings as well as the refusal of the military to allow journalists into the town has given rise to concern that the military is working on a cover up.

“The glaring discrepancies between the facts on the ground and statements by senior military officials raise concerns that they tried to cover up military abuses,” said Daniel Bekele, Africa director at Human Rights Watch.

“Since the attack, the military has restricted journalists’ access to Baga, a remote fishing community on the shores of Lake Chad, 200 kilometres northeast of the city of Maiduguri. Boko Haram has destroyed mobile telephone towers in the area, claiming that security services used mobile phones to track down its members, making communication particularly difficult for survivors of the attack,” the statement noted.

Human Right Watch called on the government to “thoroughly and impartially investigate allegations that soldiers carried out widespread destruction and killing in the town.”

“The Nigerian military has a duty to protect itself and the population from Boko Haram attacks, but the evidence indicates that it engaged more in destruction than in protection,” said Mr. Bekele.

Some residents who fled the town after the attack told Human right Watch that they saw soldiers in uniform kill residents and burn houses.

The statement quoted a “27-year-old woman, who stayed in her house after the gunfire erupted, described to Human Rights Watch how soldiers went door-to-door looking for any men that remained in her neighbourhood.”

Another resident said soldiers had threatened to treat habitants of the town as insurgent members openly before the attack.

“Because of the number of buildings destroyed by fire as well as their distribution across large sections of the town, Human Rights Watch believes that such fires were intentionally set and not inadvertently sparked by the detonation of rocket-propelled grenades or improvised explosive devices. Such weapons could not ignite fires on such a wide scale, nor could they set fire to non-attached structures. Small arms and light weapons do not contain the amount of explosive or incendiary material to produce such a scale of damage,” Human Rights Watch said.