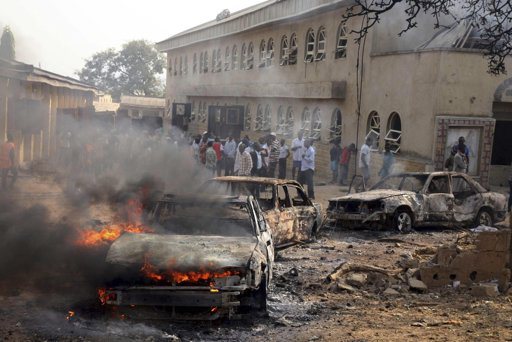 A Borno State Senator, Maina Lawan, on Saturday revealed that the actual death toll in the clash between soldiers and Boko Haram is 228, while over 4000 houses were also burnt down.

Baga is the birth place of Senator Lawan who represents Baga and other towns in Borno North in the Nigerian Senate.

The villagers had told the state governor and journalists, two days after the incident, that they buried 185 people after the clash, a figure disputed by the Nigerian Army.

Mr. Lawan, a former Governor of Borno State, expressed fears of an epidemic if the Federal Government does not immediately deploy more rescue and humanitarian aide workers to assist the displaced people.

The National Emergency Management Agency and the Nigerian Red Cross are already in Baga helping the surviving victims.

The All Nigeria Peoples Party Senator told journalists in an interview that though a special committee of the federal government would be investigating the Baga massacre, and he hopes for a factual finding from them, he decided to speak out so as to salvage the plight of the surviving victims.

“I do not intend to join issues with Nigerian military spokesman over the authenticity of his figures, but the fact is that I visited Baga and visited the three graveyards where the victims were buried. I had interacted with the aid agencies which did some of the burials, I had interacted extensively with the victims and their families.

The Nigerian military, after making contradicting statements about the crisis, claimed that the casualty was exaggerated. The Joint Task Force, whose officers are accused of starting the fire that killed most of the victims, claimed only six civilians were killed.

Mr. Lawan, however, said the fire has caused a major humanitarian crisis.

“We have a serious humanitarian crises at hand in Baga and the people are at the risk of epidemics because over 4000 households have been displaced in the upheaval of fire disaster that trailed the military operation in Baga. The world should understand that a house does not necessarily mean mansion. A small peasant farmer’s house could be covering a space of 50 square meter and there he lives with his wife and two children – but that still is his house.

“As a matter of fact, anybody who walks the kilometres of houses burnt will shed tears no matter how harden his heart is,” he said.

The Senator also lamented the poor and inadequate assistance being given to the victims which he said were grossly inadequate compared to the massive nature of the displacement.

“I spent two says in Baga and all the while women and children were seen sitting under scorching sun because the two tents erected at the aid camps could not accommodate a quarter of the displaced populace. We plead to both humanitarian and spirited individuals and Nigerians to come to the aid of these people because the situation is very, very bad,” Mr. Lawan said.