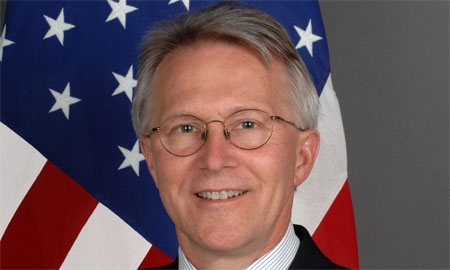 Again, U.S. tells Jonathan to be serious about fight against corruption

The United States has for the umpteenth time told President Goodluck Jonathan to be serious about the fight against corruption, saying only if the president does so, will he be seen as serious about good governance.

The American Ambassador to Nigeria, Terence McCulley, stated this in an editorial published on the U.S. embassy website.

Mr. McCulley called on the government to show more sincerity in the fight against corruption; pointing out that corruption causes economic hardship and helps spread violence and other forms of violent criminality.

“By attacking corruption, Nigeria will send a clear signal the country is indeed committed to good governance, to the security of its citizens, and to its rightful place as a significant actor on the global stage.”

This comes about a month after the U.S. condemned the pardon granted by the Jonathan administration to Diepreye Alamieyeseigha, a former Bayelsa Governor who was convicted of stealing state funds.

The U.S. said it saw the pardon granted the ex-governor, who is still wanted in the U.K. for money laundering after he jumped bail, and Shettima Bulama, a rogue banker as ” a setback in the fight against corruption.”

Mr. McCulley also advocated for more respect for human rights in the country saying “it is the keystone for peace and stability.”

He also condemned the senseless killings and attack by the insurgent Boko Haram.

In an apparent criticism of the planned amnesty for the sect members by the Federal Government, Mr. McCulley said “any persons or groups who use violence must be held accountable.”

He also raised concern at the growing complaint of extra-judicial killings levelled against the security forces fighting the insurgency. He called on the government to take appropriate action against those found responsible. He said that the use of excessive force by security forces could be counterproductive in the fight to flush out extremists.

“We remain deeply concerned about reports of extra-judicial killings, illegal detention, and destruction of property by security forces. Such acts create a deadly cycle of mistrust, harming the very citizens the security forces pledge to protect. We urge the Government of Nigeria to investigate reports of excessive use of force by security forces, and to take the necessary legal actions against those responsible,” he said.

“The fundamental principle remains that a nation’s security forces must protect its citizens: the government of Nigeria remains responsible for providing security for the people of Nigeria, and the United States remains a dedicated partner in this effort.”

Freedom of the Press

In the light of recent crackdown on media houses with dissenting opinions from that of the government, the ambassador said a free press and the freedom of expression are crucial to a functioning democracy.

“A vibrant free press is critical to illuminating public discussion on issues key to Nigeria’s democracy, including security and corruption. The silencing of journalists, political critics, and others, whether via arrest and detention, threats, or other forms of intimidation, has no place in a democratic society. Respect for the rule of law is paramount and must start with the government itself,” he said.

Mr. McCulley called on Nigerians to be united, irrespective of different ethnic and religious orientations, towards fostering of democratic principles and the respect of human rights.

Illegal loggers in Ogun protest suspension of their activities