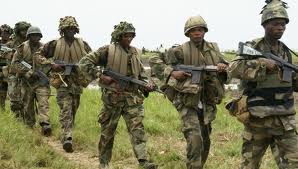 The Nigerian Military has claimed that officers of the Joint Task Force killed 25 insurgents in Baga during a battle on Friday night and early Saturday.

The Director of Defence Information, Brigadier General Chris Kolade, who said this to journalists in Abuja on Monday said that the information available to the Defence Headquarters suggests that one soldier was also killed.

He said the soldiers acted based on the distress call by residents of Baga.

Mr. Kolade did not comment on the civilian casualties.

Residents of Baga told the Borno State Governor, Kashim Shettima, that they buried 185 victims, including women and children, after the battle. Many residents confirmed to PREMIUM TIMES that majority of the victims died from the fire that engulfed their homes after the battle. They accused the soldiers of starting the fire.

“Only God can understand what we have done to deserve this. But the soldiers were mindless that night in their approach; they killed and burnt our houses, chased everyone into the bush including women and children. So far we have buried 185 corpses. – some were burnt beyond recognition; others are hospitalised with various degrees of burnt,” a resident, who begged to remain anonymous, said.

The JTF commander in Borno, Brigadier general Austin Edokpaye, had claimed that the fire was started by rocket propelled grenade used by the insurgents.

The Nigerian Red Cross has said that 187 people were actually killed in the incident which has been condemned by Nigerians and civil society groups.