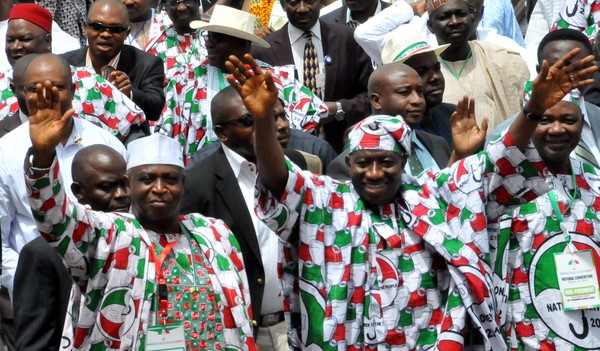 President Jonathan and party chiefs at a PDP National Convention

The president said he is focused on providing dividends of democracy.

President Goodluck Jonathan on Tuesday warned all political office holders, aspirants, and their sponsors to desist from any campaigns for 2015 on his behalf.

In a statement to the media, the Senior Special Adviser to the President on Media and Publicity, Reuben Abati, said Mr. Jonathan is totally focused on the implementation on his administration’s agenda for national transformation, and not politics of the forthcoming election.

“In spite of clear and unambiguous pronouncements by President Goodluck Jonathan that he remains fully focused on the implementation of his Administration’s agenda for national transformation and not the politics of future elections, the Presidency has noted with concern that some individuals, groups, organisations and sections of the media have continued to foster the myth of a President and Administration solely concerned with jostling and self-positioning for the 2015 elections,” Mr. Abati said

While referring to a Monday publication on“21-member Committee Empanelled for Jonathan’s Second Term Bid” by ThisDay Newspaper, Mr. Abati said that no decision has been taken by Mr. Jonathan regarding 2015 elections; and neither has any organization or committee been set up for the purpose.

“The Presidency seizes this opportunity to warn all 2015 political office seekers, and their sponsors, friends or collaborators, to desist from unconscionable exploitation of President Jonathan’s name in the service of jaded antics of self-aggrandisement, promotion and positioning.” Mr. Abati said

He claimed that the publication lacked credibility and that Mr. Jonathan had earlier stated that he wished to be left alone to focus on his transformation agenda as political parties are yet to conduct primaries for candidate selection.

“The Presidency has also observed what seems to be an emerging trend whereby persons with their eyes fixated on political opportunities in future elections are beginning to use President Goodluck Jonathan’s name to promote themselves and their vaulting ambitions.

“It was clearly in this regard that some unscrupulous persons began to print 2015 campaign posters with President Jonathan’s photograph whereas the Independent National Electoral Commission is yet to announce the commencement of campaigns and political parties are yet to conduct any primaries for the selection of candidates,” Mr. Abati said.

Mr. Abati also said President Goodluck Jonathan has not endorsed any candidate for the Anambra gubernatorial election coming up later this year or for any other election leading to 2015.