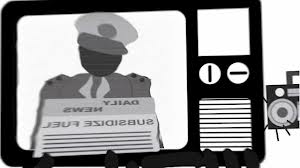 Banned for being “highly provocative”, Fuelling Poverty, a documentary inspired by the huge scam around the subsidization of petrol in Nigeria, has garnered more attention than might have been possible where the ban not announced.

PREMIUM TIMES had exclusively reported on Saturday how the Nigerian Film and Video Censors Board, NFVCB, wrote a letter to the filmmaker, Ishaya Bako, saying the contents of the documentary “are highly provocative and likely to incite or encourage public disorder and undermine national security.”

The Board warned Mr. Bako to abide by the order as he would now be treated as though he were a threat to national security.

“All relevant national security agencies are on the alert. A copy of this letter has been sent to the Director General, Department of State Services and the Inspector General of Police for their information,” the Board said to Mr. Bako instilling fear in the filmmaker whose aim for the film was for people to reflect on the process of change.

The documentary had witnessed a seemingly unimpressive amount of views since it was first released for public consumption in December.

Some social media analysts say while the film came with a strong message of change and advocacy against corruption and greed in Nigeria, there was no commensurate strategy for airing and distribution.

The documentary had not been shown on any Nigerian television station; and on the internet, only about 2,000 people had viewed it.

But the ban by Nigeria’s film censors board propelled the video to go viral after activists on social media, in protest against the ban, began sharing the video online.

Angry at what has been perceived as the clamp down on media freedom in Nigeria, particularly the unruly detention of journalists by Nigeria’s security agents even without charges being pressed against them, the activists on social media platforms as twitter and facebook, urged Nigerians to view the documentary.

The response to the call has been enormous.

The film producer had no inkling that this would have been possible, he said to PREMIUM TIMES. Mr. Bako said that for four months the film had been without motivating airplay, explaining that the ban certainly popularized it.

“On the one hand, I think it is a good thing … I am only happy that more and more people will see the film,” Mr. Bako said.

Mr. Bako also disagreed that there is any inciting material in the film. “ I didn’t think the film should have been banned, there is nothing in the documentary that is news. I am still disappointed that the film was censored

The ban on the documentary and other assault on journalists, at federal and state government level, have been described by critics as an abuse of Nigerians rights to freedom of information; and a stealthy descent into tyranny.

Civil Society Groups have risen in strong condemnation of the recent attacks on Nigeria’s media.

Tive Denedo, the Campaign Director of the Media Rights Agenda, said the ban on the documentary is a “violation of the right to the freedom of right to information.”

“The federal government are become reactionary… it is a road to proscription of news houses.

“The federal government should rescind the ban immediately before the people take to the streets which the government will not like,” he said.

Mr. Denedo also pointed out that the ban made the film more popular.

“They also made a serious mistake, Mr. Denedo said, “more people will now want to see the film”.

The Executive Director of the Enough Is Enough, a coalition of young Nigerians promoting good governance and one of the foremost groups protesting the ban on the documentary, said having seen the documentary, she is baffled that it will be described as a material that will provoke public rage.

Ms. Adamolekun said the clamp down on the documentary is a reflection of the war on the media, including the social media by the presidency.

She said the ban did more good than harm to the documentary.

“72 hours later, the documentary has gotten twice as many views than it had, this is pretty significant,” she said.

Ms. Adamolekun especially lamented that over a year after the corruption in the fuel subsidy scheme was exposed, “not one person has been convicted”.

“It speaks volume to government on tackling the issue,” she said.

The ban on the documentary may also show a gradual descent into arbitrariness by the federal government.

In August 2012, Benedict Uwalaka, a photojournalist with Leadership Newspapers, was beaten to a state of coma by attendants of the Lagos State University Teaching Hospital, Ikeja.

Another journalist working with BusinessDay Newspapers, Kehinde Akintola, was beaten in Abuja, by officials of the Department of Federal Capital Territory Road Transport Service, DRTS.

In December 2012, the Akwa Ibom correspondent of ‘The Nation Newspaper’ was pummeled by the SSS in Akwa Ibom amidst other tortuous experiences journalists have had in the state.

At the federal government level, it has been tales of woes. On December 24, 2012, the State Security Service, SSS, in military style, stormed the homes of two journalists who write for Al-Mizan, a Kaduna-based Hausa language newspaper, and arrested them. They were detained for days without trial.

On April 8, four journalists of Abuja-based Leadership newspaper were detained by the police for refusing to name the source for a story accusing the president of plotting to botch a proposed merger of four opposition parties in Nigeria.

On February 22, the National Broadcasting Commission, NBC, suspended the operating license of Wazobia FM over allegations that their programme triggered the killing of nine female healthcare workers shot to death in the restive northern metropolis.

On March 3, the NBC suspended the broadcast of a popular programme, Dimokradiyya a you, on Radio Gotel, Yola, a private station owned by a former Vice President, Atiku Abubakar.

The Cult of Power, By Okey Ndibe