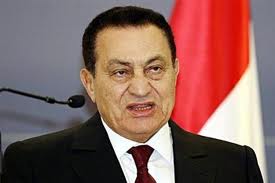 Some Egyptians believe the life sentence given the former dictator was  lenient.

Former Egyptian president, Hosni Mubarak is to return to the dock on Saturday for a retrial, 10 months after the 84-year-old was sentenced to life in prison over the killing of protesters during the Arab Spring.

Mr. Mubarak, along with his former interior minister, Habib al-Adli, and six former senior policemen, would face the judges again in an Egypt that has lost the optimism that followed his overthrow in February 2011.

His sons were also to be retried on corruption charges after a successful appeal by the prosecution.

The appearance of Mr. Mubarak lying on a stretcher behind the bars of the dock as his trial started in August 2011 was one of the most tangible symbols that Egypt had changed.

However, the outcome of the trial was perhaps a sign that the changes have not come anywhere near fulfilling the hopes of the country’s revolutionaries.

The eight men were charged with responsibility for the killings of 846 protesters during the revolt.

On June 2 last year, the Criminal Court cleared the six policemen while jailing Messrs. Mubarak and al-Adli for life but only on the grounds that they had failed to act to prevent the deaths.

“The court made a strange decision,” said Hoda Nasrallah, a lawyer who prepared a report on the trial for the non-governmental group, Egyptian Initiative for Personal Rights. “It changed the nature of the accusation.”

“The prosecution said that Mubarak and al-Adli were party to the killing of the demonstrators, that they conspired with the Interior Ministry officials,” she said. “The court instead decided that they had just failed to perform their duty (to prevent the killings).”

“On the basis of that judgement,” she added, “the overturning of the verdict on appeal was expected.”

An appeals court did just that in January and ordered the retrial.

In its report on the original proceedings, Mr. Nasrallah’s organisation said “this farcical judgement” came about because the institutions of Mubarak’s regime had been responsible for the relevant investigations.

The court’s ruling, which came at the height of Egypt’s first free presidential elections, inspired one of the last moments of unity between the powerful Muslim Brotherhood and the country’s other revolutionary forces.

Crowds showed their disgust at the acquittals and their anger that Mr. Mubarak had escaped a death sentence.

The brotherhood described the verdict as “absurd, illogical, unreasonable.”

However since the victory of its candidate Mohamed Morsi in the elections two weeks later, the political atmosphere has deteriorated rapidly. The belief that the Muslim Brotherhood’s performance in power has been dismal is rising with the economy in decline and a widespread perception of insecurity.

November saw massive demonstrations – both for and against Mr. Morsi – after he signed decrees granting himself sweeping powers and sacking Mubarak-era prosecutor general Abdel-Meguid Mahmoud in favour of Talaat Ibrahim.

The move outraged many judges and prosecutors who saw it as an attack on the independence of the judiciary.

An assault on protesters at the presidential palace reportedly by Brotherhood supporters further envenomed the political atmosphere, and there have been repeated outbreaks of rioting since.

As frustration with the current situation grows and the memory of the revolution recedes, Mr. Mubarak’s retrial is not seizing the public imagination as his initial trial did.

“It will limit the polarisation that would take place if he [Mubarak] was released,” Mr. Ashour said.

However, there is also an element of risk for Mr. Morsi.

“If the new prosecutor general fails to convict Mubarak, it will be a major blow to Morsi,” Mr. Ashour said. “The main reason given for dismissing his predecessor was that he was appointed by Mubarak and turned a blind eye to the violations of the state security service … and failed to bring solid cases leading to the conviction of the police officers accused of killing protesters.”

Much depends, Mr. Nasrallah said, on the court hearing the retrial. If it refers the case back to the prosecutor general’s office for further investigation, as her organisation has recommended, it could then be presented with a much stronger case against all the defendants.

On Saturday, Egypt’s eyes would once again be on the courtroom but with far less excitement and optimism than the first time around.