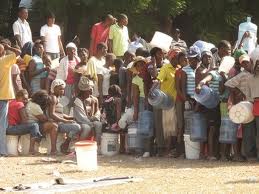 The World Bank is supporting the Urban Water Supply Programme with the objective of increasing access to pipe-borne water in some states.

No fewer than 15 million Nigerians are expected to have access to potable water under the National Urban Water Sector Reform project when completed, an official has said. Benson Ajisegiri, a Deputy Director in the Federal Ministry of Water Resources, said this in an interview with the News Agency of Nigeria (NAN) on Thursday in Abuja.

The World Bank is supporting the Urban Water Supply Programme with the objective of increasing access to pipe-borne water in the capitals of five states.

The states are Kaduna, Ogun, Enugu, Lagos and Cross River. Mr. Ajisegiri said that the project was also expected to support 14 urban towns and improve the reliability and financial visibility of the state water agencies through optimal involvement of private sector partners.

He, however, said that the greatest challenge of the project had been how to get the water agencies to imbibe commercial orientation.

“The greatest challenge has been how to change the people, especially those are working in the agencies to imbibe commercial orientation that will make them see water as an economic good. You need to recover your cost; because most of them are civil servants, so they see the business of water as a social service; there has been a bit of a challenge to change their orientation.

Mr. Ajisegiri, who is the head of the Water Reforms and Public Private Partnership (PPP) unit in the ministry, said the projects would increase the financial feasibility of most of the water agencies in the implementing states. He said it would help the water agencies to be able to recover cost and thereby sustain services to the people.

According to him, the second aspect of sustainability is to give capacity to those that are there on how to better operate and maintain the scheme. He said that the effort would help the agencies to do preventive maintenance rather than breakdown maintenance, adding that they don’t need to wait for equipment to breakdown before repairing it.

“The most important is the financial viability because if you don’t have money to maintain your scheme, you will properly delay it and before you think of doing it, it would have gone beyond repairs. In some of the states, some of them have increased their tariffs because when we started, tariff was a major issue; some states charge as low as N25 per cubic litre that means they are charging N25 per 1,000 litres of water and that translates to two and a half kobo per litre.

Today, some of them have increased and are gradually increasing because if they don’t increase, you are talking about five drums of water for N25. Mairuwa in Abuja sells N20 litres for about N20; if you are charging so low, how do you want that investment to be sustainable? So part of what we are looking at is tariff reforms. We are also looking at good operation and maintenance capacity on the part of the agencies, to be able to carry out these activities for themselves.’’