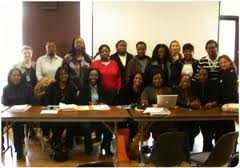 Some religious leaders and individuals oppose the teaching of sex education.

The International Federation of Women Lawyers (FIDA) has advocated the inclusion of sex education in schools’ curriculum to curb rising cases of violence against women.

The President of the body, Hauwa Shekarau, made the call in an interview in Abuja on Thursday. She said that increased access to social networks, among other factors, had exposed children to several violent acts, including gender violence.

“Children tend to put what they see on social networks into practice because there are no proper avenues to teach them the right thing,” she said. Mrs. Shekarau said that in spite of negative responses from some religious leaders and individuals, regarding the teaching of sex education, it was important for children to be taught moral values.

“There was a time some NGOs were involved in trying to include sex education in schools’ curriculum but a lot of religious leaders said it will expose children to promiscuity. What we are seeing today is reinforcing the need for sex education because, at the end of the day, we don’t teach these children the proper thing. They learn about these things on the Internet and from the wrong set of people and they go out of control.

“I know a lot of people have kicked against it; but the social networks are right here and all you need do is just get on the Internet, type a particular thing and everything is there for you to see,” Mrs. Shekarau said.

She said that the sex education provision in the revised secondary school curriculum was not adequate to enlighten children on moral values, adding that there was need for a review.

“I am aware that a revised version of the curriculum includes some kind of sex education but I think there is need for it to be reviewed so that it can accommodate all these issues. We have tried in some of our engagements with women to consider all these issues as they are bringing up their children and inculcate in them the moral upbringing that is expected of them. We have a duty to inculcate these values into them so that they can be better citizens,’’ she said.

Mrs. Shekarau called on parents to create time within their tight schedules to inculcate moral values in their children rather than leaving them in the hands of nannies and strangers.

She added that “Children should not be left with nannies and young girls who themselves need moral assistance.”

A Memo To Boko Haram, By Adekoya Boladale