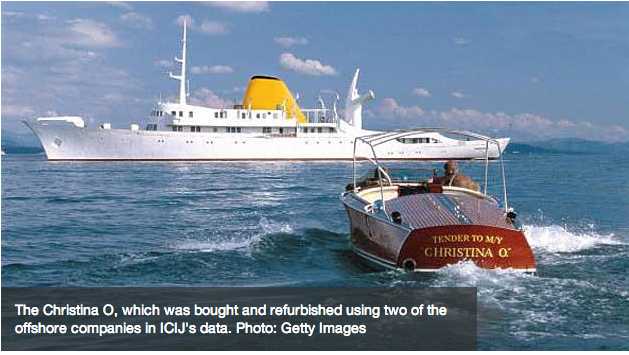 The International Consortium of Investigative Journalists (ICIJ), a project of the Center for Public Integrity, released today its first of many reports from a 15-month investigation that cracks open the historically impenetrable world of offshore tax havens.

Drawing from a leaked trove of 2.5 million digital files, ICIJ led what may be the largest cross border journalism collaboration in history.

PREMIUM TIMES is the only Nigerian media organisation invited to participate in the project. It joined the Mail & Guardian of South Africa as the only two African publications on  the gigantic project which has The Washington Post, Guardian of UK, BBC, Canadian Broadcasting Corporation, Le Monde of France and over thirty other leading print and broadcast organisations around the world as partners.

PREMIUM TIMES will publish specific stories related to Nigeria as well as other reports it believes might be of interest to its readers.

The groundbreaking investigation opens the secrets of more than 120,000 offshore companies and trusts and nearly 130,000 individuals and agents, exposing hidden dealings of politicians, con artists, and the mega-rich in more than 170 countries. Secrecy for Sale: Inside the Global Offshore Money Maze, ICIJ’s largest investigative reporting project in its 15-year history, is available at www.icij.org/offshore.

The stories released today by the ICIJ and its partner outlets around the world are the first installment in an ongoing series.  An initial group of stories will run between April 3 and April 15, 2013 with more reporting to follow throughout the year as ICIJ and its partners continue the investigation.

“This investigation lifts the curtain on the offshore system and provides a transparent look into the secret world of tax havens and the individuals and companies that use and benefit from them,” said Gerard Ryle, Director of the ICIJ.   “We already knew how secret and inaccessible the offshore industry is, but we were surprised by how vast and far reaching it is. It draws its clients not only from the world’s super-wealthy, but also from everyday professionals from all around the world.”

The files identify the individuals behind the covert companies and private trusts based in the British Virgin Islands, the Cook Islands, Singapore and other offshore havens. They include American doctors and dentists and middle-class Greek villagers as well as Russian corporate executives, Eastern European and Indonesian billionaires, Wall Street fraudsters, international arms dealers and families and associates of long-time dictators.

Among the investigation’s key findings:

While reporting by the ICIJ and its partners shows that many users of offshore are engaged in legitimate transactions, the project team’s investigations raise questions about the lack of transparency, lax law enforcement and illegal practices that are prevalent in the offshore world.

“This investigation was the most extensive in our history. It would not have been possible without the cooperation of our international partners,” said Bill Buzenberg, Executive Director of the Center for Public Integrity.  “Because of the magnitude of this cross-border collaboration we are able to provide a window onto the offshore world, an important step toward bringing transparency and accountability to an industry that over the last several years has grown beyond regulation and control.”

The collection of leaked information, totaling more than 260 gigabytes of data, includes corporate files, emails, account ledgers, and other records that show cash transfers, incorporation dates and links between individuals and companies. It is believed to be one of the largest collections of leaked data gathered and analyzed by journalists.

The files illustrate how offshore financial secrecy has spread aggressively around the globe, allowing the wealthy to avoid taxes, fueling corruption and economic woes in rich and poor nations. The current banking crisis in Cyprus is one example of how the offshore system can impact an entire country’s financial stability.

To analyze the documents, ICIJ collaborated with journalists from PREMIUM TIMES, The Guardian and the BBC in the U.K., Le Monde in France, Suddeutsche Zeitung and Norddeutscher Rundfunk in Germany, The Washington Post, the Canadian Broadcasting Corporation (CBC) and 31 other media partners around the world.

The reporters and editors on the project team thoroughly fact-checked the data and cross-referenced it with other information, including court records, government reports and financial databases. Team members interviewed hundreds of experts, government officials, attorneys, offshore clients and other sources around the world.

About the International Consortium of Investigative Journalists (ICIJ)The International Consortium of Investigative Journalists is a global network of reporters who collaborate on in-depth investigative stories. Founded in 1997, ICIJ was launched as a project of the Center for Public Integrity to extend the Center’s style of watchdog journalism, focusing on issues that do not stop at national frontiers. With 160 members in more than 60 countries, ICIJ is dedicated to investigating cross-border crime, corruption, and the accountability of power. Backed by the Center and its computer-assisted reporting specialists, public records experts, fact-checkers and lawyers, ICIJ reporters and editors provide real-time resources and state-of-the-art tools and techniques to journalists around the world.

About the Center for Public IntegrityThe Center for Public Integrity is a nonprofit, nonpartisan, and independent digital news organization specializing in original investigative journalism on significant public policy issues. Since 1990, the Washington, D.C.-based Center has released more than 500 investigative reports and 17 books to provide greater transparency and accountability of government and other institutions. It has received the George Polk Award and more than 50 other major journalism awards, including honors from Investigative Reporters and Editors, Online News Association, Overseas Press Club, Society of Environmental Journalists, and Society of Professional Journalists.

Inside TrustNet, a company selling secrecy to the rich, including Nigerians, helping them to hide wealth