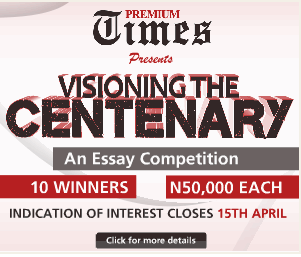 PREMIUM TIMES is inviting interested Nigerians to participate in an essay competition to commemorate the one century existence of the country since its amalgamation.

The essay, titled ‘Visioning The Centenary,’ hopes to look at the remarkable journey Nigeria has taken from mere geographic expression of several hundred ethno-nations to a country in one hundred years.

The competition, open to all Nigerians but with special emphasis on people aged 30 and less, is expected to be an essay on events visualised on a decade-by-decade progression

“This is part of our corporate social responsibility for our country,” PREMIUM TIMES’ editor-in-chief, Dapo Olorunyomi, said of the contest. “We want to encourage young people to actively engage and consistently participate in constructive debates about their country.”

Each contestant can enter for more than one decade but must not exceed three essays.

The focus elements of each essay should revolve around the defining politics, science, technology and arts of that decade; it should touch on the defining intellectual momentum, major events, and leaders of thought in that period.

The essay should also mention outstanding Nigerians lost in that decade and their contribution to society.

The essay should be sent, as an attachment, to essays@premiumtimesng.com and must be submitted on or before May 25th, 2013.

Further details about the contest are available here.