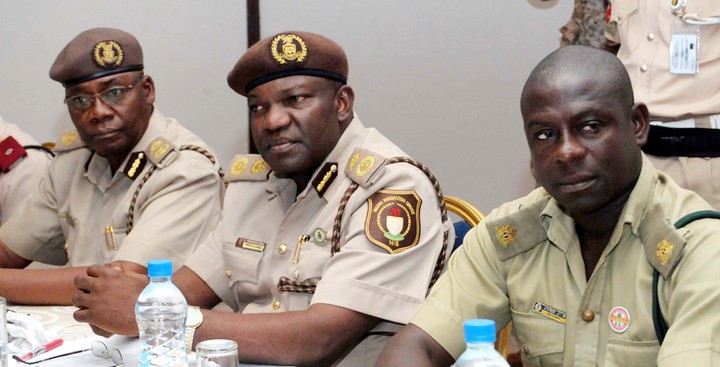 The immigrants were found after a raid carried out my men of the NIS in various parts of Lagos.

The Nigeria Immigration Service, NIS, on Tuesday repatriated 57 irregular immigrants from the Republic of Niger.

The Comptroller of Immigration in Lagos, Rasheed Odupeyin, told newsmen that the immigrants were among the 92 suspects arrested during a raid by the police.

He said the suspects were arrested at the weekend in a joint operation by the police and the Lagos State Task Force on Environmental Offences, from various parts of the state.

Mr. Odupeyin also confirmed that no weapon was found on any of the suspects but could not say whether the suspects had link with any terrorist group.

He said that 17 of the 92 suspects, who were found to be Nigerians after a thorough screening, would be handed over to the police for further investigation.

Mr. Odupeyin said that the 18 Malians among the suspects “may not be repatriated immediately because of the ongoing war in that country”.

He, however, said that the service would contact the office of the United Nations High Commission for Refugees in Lagos to ascertain the status of the Malians.

One of the suspects, Ibrahim Mohammed, a Nigerian, claimed that most of them were from Takai in Kano State and that they had no link with any terrorist group.

“We are in Lagos to earn a living through hard work,” he said.

One of the Malians, who gave his name simply as Amadu, claimed that he had been coming to Lagos from Mali through Kamba, a border town in Kebbi State and that he has no criminal record.

The suspect, who admitted that he has no travel documents, claimed that he was a water vendor in Surulere, Lagos.

Akpabio: In the footsteps of Peter Odili, By Ehis Roberts-Omoighe