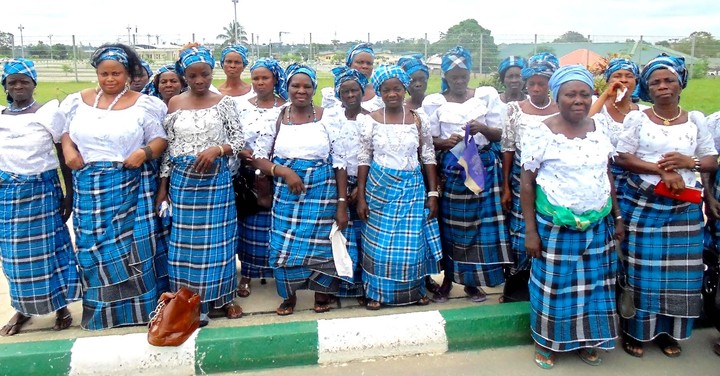 Widows protesting outside the government house in Uyo

Hundreds of widows in Akwa Ibom on Monday trooped to the Government House, Uyo, urging   Governor Godswill Akpabio to empower them financially to enable them establish small-scale businesses

The News Agency of Nigeria (NAN) reports that the widows, who came in buses from the 31 Local Government Areas in the state, could however, not see the governor.

This was because Governor Akpabio had reportedly travelled out of the state for official engagements.

Speaking with NAN, the President of the Akwa Ibom Widows Association, Mrs Sylvia Effiong, said that they decided to bring their case to the governor as they were dying in pains and hunger without anybody to assist them.

Mrs Effiong said that they had been watching through the television how Governor Akpabio had been empowering other less-privileged people and they wanted to benefit from such gesture.

According to her, “all we need is financial assistance to enable us establish small-scale businesses and feed our children.

“Our children are in schools and we don’t have anybody helping us in paying their fees. Those mediating for us to see the governor are not sincere,” she stated.

The association president said that a lot of groups were being empowered in the state but that the widows had not been captured to benefit from the gesture.

“We are widows from all the 31 Local Government Areas in the state. I don’t know if it is because we are minority,” she said.

Mrs Effiong insisted that the widows would continue to pay visits to Mr. Akpabio until he attended to them.

“We are not relying on anybody to mediate between us and the governor because we know that sincerity will be a problem.”