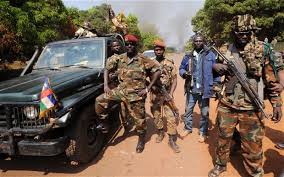 The leader of rebels in Central African Republic will keep a power-sharing government named under a January peace deal after declaring himself president, a spokesman for the insurgents said on Monday.

“The current prime minister remains in place and the cabinet will be slightly reshuffled,” Eric Massi said by telephone. “Bangui is under our control and calm but we have things to do on the ground in terms of security. Looting must be stopped.”

The rebels accused Bozize of breaking the agreement and launched hostilities on Thursday, quickly sweeping south to seize the capital of the mineral-rich former French colony.