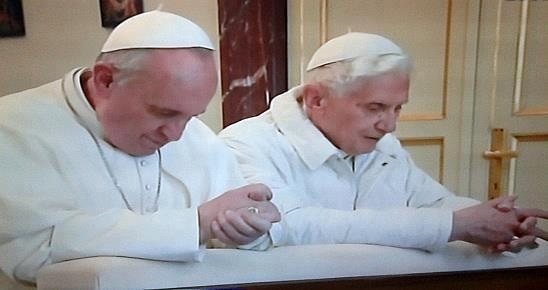 In yet another first, Pope Francis had a lunch meeting with his predecessor, Pope Emeritus, Benedict XVI. There is no public record of two popes ever meeting in history. At least, it is the first time in 600 years that Saturday afternoon’s meeting has taken place.

Pope Francis was flown by helicopter to Castel Gandolfo, the residence of the Pope Emeritus for a private lunch.

Pope Francis succeeded Benedict on March 13 after the latter resigned due to failing health.

They have spoken by telephone since Francis was elected but this is their first face-to-face meeting.

The only other time that a meeting like Saturdays could have happened was in 1294, after the resignation of Celestine V after 5 months as pope. But his successor, Boniface VIII who was elected days later, imprisoned Celestine who eventually died within a year. There is no record of their meeting in person during this period.

The two men on Saturday held each other in a warm embrace after the helicopter landed. They subsequently prayed together and held a 45 minutes talk. Vatican spokesperson, Fr. Lombardi described the discussion as “family like.”

During the prayer, Fr. Lombardi told reporters, Pope Benedict turned over the position of the kneeler before the altar, which is traditionally a position of honour, to Pope Francis but he declined saying: “We are brothers, we pray together.”

Pope Francis presented Benedict a gift of a painting he said reminded him of Benedict’s gifts to the Church.

Chinua Achebe: Death, Where Are Thy Claws? By Niyi Osundare