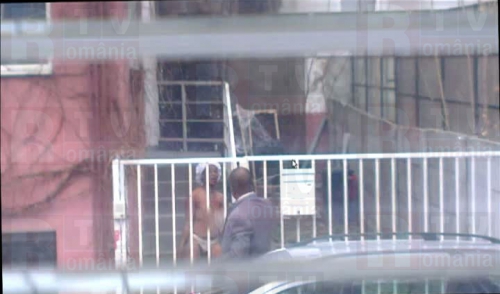 The woman is believed to be suffering deep depression following the death of her husband.

A female employee of the Nigerian Embassy in Romania put on a naked show of herself in Bucharest, the Romanian capital, sparking a scandal, Romania TV is reporting.

The woman sparked the scandal when she danced naked in front of her former apartment before bewildered neighbors.

In an amateur video captured by neighbours and published by Romania TV, the lady is seen almost completely naked, dancing in front of the house. She was watched by two men, believed to be her colleagues, from over a fence long enough for neighbours to shoot the scene and for the police to arrive with an ambulance.

She was later wrapped in a blanket and taken away by the police in an ambulance to the hospital.

According to Romania TV , the woman suffered a deep depression following the death of her husband.

She was described as a financial department staff of Nigerian Embassy in Romania and lived in the building for about two years before it was emptied last Tuesday.

The Romania TV also reports that in an attempt to protect the woman from the press, Nigerian Embassy employees were very violent with journalists, swearing and assaulting a female journalist physically in the process.

When contacted, the Foreign Affairs Ministry in Nigeria which coordinates the activities of Nigerian foreign missions said they were not aware of the incident.

“I am just hearing it from you for the first time,” Ogbole Ode, spokesman of the ministry said.