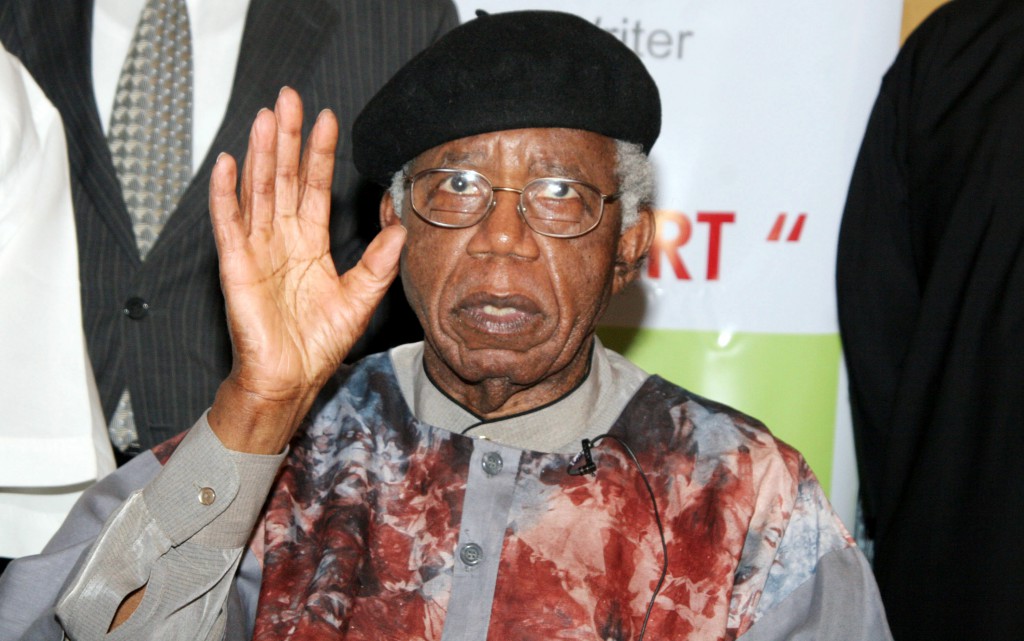 Chinua Achebe died Thursday in the United States where he was living.

President Goodluck Jonathan has lamented the death of Chinua Achebe, which occurred on Thursday, saying his immense patriotism and sincere commitment to a better Nigeria would be greatly missed.

Mr. Achebe died in the United States where he was living.

In a statement signed by his media aide, Reuben Abati, the president said he received with immense sadness, news of the passing away of Nigeria’s acclaimed writer, scholar, tutor, cultural icon, nationalist and artist of the very first rank.

Mr. Jonathan joined Mr. Achebe’s family, friends, colleagues, past and present students, admirers and all who have learnt indelible lessons of human existence from his award winning works of literature in mourning legendary author.

He added that he is consoled by the knowledge that Mr. Achebe would live forever in the hearts and minds of present and future generations through his great works which brought him enduring international fame and countless honours.

The statement said, “The President believes that Prof. Achebe’s frank, truthful and fearless interventions in national affairs will be greatly missed at home in Nigeria because while others may have disagreed with his views, most Nigerians never doubted his immense patriotism and sincere commitment to the building of a greater, more united and prosperous nation that all Africans and the entire black race could be proud of.”

In a statement signed by the spokesperson of the Nelson Mandela Centre of Memory, Sello Hatang, the former president referred to Mr. Achebe as a writer “in whose company the prison walls fell down.”

A former Nigerian Vice President, Atiku Abubakar, described the late writer as an icon of unmatched integrity and conviction.

In a tribute to the late professor and author of the famous “Things Fall Apart”, Mr. Abubakar recalled how Mr. Achebe forcefully rejected and condemned the July 2004 political crisis in Anambra State during which thugs attempted to remove a democratically elected governor on the orders of a godfather.

He said that Mr. Achebe rejected a national honour conferred on him by the former President Olusegun Obasanjo and President Goodluck Jonathan administrations, based on his convictions and principle.

According to the former Vice President, few Nigerians would have followed the courage of their conviction and reject national honours because of the fear of losing favour from those in power.

Former Head of State, Muhammadu Buhari, who expressed shock at Mr. Achebe’s demise, said the late author effectively combined intellectualism and simplicity and “was known for an inimitable courage in freely expressing his personal convictions on prevalent national discourse irrespective of the desire of the principalities of the land.”

He prayed God to grant the family and the entire nation the fortitude to bear the loss.

A younger political voice, Nuhu Ribadu, also joined the early mourners, sending out media tribute that paid glowing honour to Mr. Achebe as “a pillar of African literature, and a missioner of an authentic sense of African culture who in courage and sincerity spoke truth to power.”

In his tribute, the Senate President, David Mark, said the death of Mr. Achebe is a huge loss to Nigeria and the academia.

Mr. Mark, who received the news of Mr. Achebe’s death in Ecuador, described him as an accomplished writer and a world celebrated author who lived a life worth of emulation.

Recalling that his bestseller, “Things Fall Apart”, was the first African book to be translated into more than 70 languages, the Senate President noted that Mr. Achebe “was a patriotic Nigerian who used his literary prowess to seek a better society for our nation. We shall miss him.”

In a statement titled, “It’s the exit of a literary iroko”, the Deputy Senate President, Ike Ekweremadu, expressed shock over the death of Mr. Achebe.

“This is a very sad development given that Achebe employed his writing prowess to paint Nigeria proudly on the global map of fame, and as a social critic, he was very courageous and spoke his mind according to his conviction without fear or favour,” he added.

Mr. Ekweremadu condoled with the professor’s family as well as the Government and people of Anambra, and the nation in general over the irreparable loss.

The Speaker of the House of Representatives, Aminu Waziri Tambuwal, described Mr. Achebe as the conscience of the nation whose words and deeds mirror those of his country’s men and women.

The Speaker noted that the late professor would be remembered as a very decent man of great integrity whose passion for the progress and development of his fatherland served as an inspiration for his literary works and political commentary.

The Deputy Speaker, Emeka Ihedioha, described the death of foremost literary icon and novelist as a devastating blow to the country, saying Nigeria has lost a titan of incomparable proportion.

While expressing immense shock and sadness at the news of Mr. Achebe’s demise, the deputy speaker said it would be a tough challenge to fill the gap left by the departed professor and globally recognized cultural hero.

“Nigeria has lost a true national hero and a towering titan of inestimable proportion whose works, words, and lifetime continue to prick the conscience of a nation in search of fairness and equity for all and sundry,” he said.

The Coordinating Minister for the Economy and Minister of Finance, Ngozi Okonjo-Iweala, said she received the news of Mr. Achebe’s death with a sense of profound loss.

She said though Mr. Achebe was 82-years-old and by any measure not too young to die, “he had so long been a part of our lives that the thought of his death has an unreal quality.”

Mrs. Okonjo-Iweala said she had known the professor’s wife, “Aunty Christy” since she was a teenager and therefore the incident was a personal loss.

The All Progressives Grand Alliance, APGA, said Mr. Achebe was a man of enormous intellectual capacity and an embodiment of patriotism.

The party, in a statement by its interim National Chairman, Maxi Okwu said the late author “was the best Nobel Laureate that never was”, adding that he enriched the literary world by his creative works particularly “Things Fall Apart” which earned him immortality.

“We mourn a great patriot, a great writer, an illustrious Igbo son who conquered his literary world and brought honour to his fatherland,” he said.