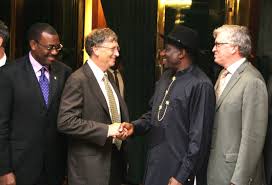 Bill Gate at a meeting with Jonathan

President’s spokesman, Reuben Abati refuted the reports and warned against those trying to pull the country down.

The presidency has said the cancellation of Bill Gates‘ visit to Nigeria is not linked to the state pardon granted former Bayelsa Governor, DSP Alamieyeseigha, and six other ex-convicts.

It also stated that the Bill and Melinda Gate Foundation has equally denied that their visit was cancelled following the Nigerian president’s decision on the state pardon.

Special Adviser to the President, Reuben Abati, in a statement on Monday night said he had been in touch with the foundation, who denied the reports. He also alleged that there were people looking for opportunities to pull down Nigeria.

“What we will like to reassure people is that those who are always looking for opportunity to pull down the country should realise the fact that this country belongs to all of us and that nobody will gain anything by trying to pull down the country. Instead, Nigerians should do everything possible to promote their own country regardless of whatever differences that may exist among us: ethnic, religious, sectarian, whatever,” he stated.

Refuting the report, Mr. Abati said, “I have read the report in some sections of the media insinuating that Mr. Bill Gates has cancelled his planned visit to Nigeria because of the recent pardon granted some Nigerians. I am in touch with the Bill and Melinda Gates Foundation and I can say that this report is not true and that it exists only in the imagination of the writers.

“Nigerians should note that President Jonathan and Mr. Bill Gates have met several times in the past and the Bill and Melinda Gates Foundation is one of the major partners working with Nigerian government to ensure that polio is completely eradicated by 2015.”

PREMIUM TIMES had exclusively reported the cancellation of the trip by the American billionaire two days after the U.S. Government expressed dissatisfaction over the pardon granted Messrs Alamieyeseigha and Bulama, two convicted fraudsters, by the Jonathan administration.