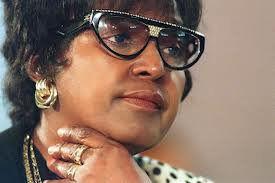 Her lawyer said the Truth and Reconciliation Commission had already dealt with the matter.
A former South African first lady and ex-wife of Nelson Mandela, Winnie Madikizela-Mandela, said on Monday she is shocked at threats by South Africa’s National Prosecutor to charge her over allegations that she was responsible for the death of two men during the apartheid era.

In 1996, Nicodemus Sono told the TRC, which investigated apartheid-era crimes, that he last saw his son, Lolo, on November 13, 1988, badly beaten, in a mini-bus with Madikizela-Mandela and members of her notorious Mandela United Football Club.

But, the remains of the two men were exhumed in Soweto last week, 25 years after they went missing, giving fillip to the suspicion that the South African authorities may indeed be preparing to press charges against Madikizela-Mandela.

However, her attorney, Pops Mageza, said in a statement on Monday:

“Mrs. Mandela wishes to express her surprise and shock at the statement that there are processes currently underway, which will lead to her prosecution for the deaths of the late Lolo Sono and Siboniso Tshabalala.”

“To her knowledge, these are matters that have already been comprehensively dealt with in open transparent televised public
hearings of the Truth and Reconciliation Commission, TRC,” the lawyer added.

Mr. Mageze said the TRC issued a final report on Sono and Tshabalala and ruled that the victims were murdered by Madikizela-Mandela’s former friend, Jerry Richardson, who died in prison.

Mr. Richardson applied for amnesty at the TRC on the basis that he received orders to murder the two from Ms. Madikizela-Mandela.

However, the TRC found that there was no evidence to support his claims.

Ms. Madikizela-Mandela is no stranger to controversy after she was convicted of kidnapping in an unrelated case in Soweto in the 1980s.

Although millions of South Africans regarded Ms. Madikizela-Mandela as the “Mother of the Nation”, her involvement in several human rights abuses has also outraged many.

The Devil’s Umbrella by Abubakar Usman