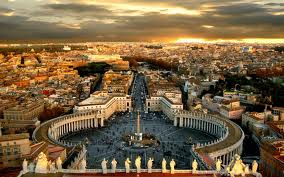 Three ballots have been taken so far but without any candidate getting the required 77 votes.

On the second day of the papal conclave, black smoke once again emanates from the chimney of the Sistine Chapel.

In a second round of voting, the 115 eligible cardinals failed to come to a conclusive decision on who among them should the next pope of the Holy Roman Catholic Church.

The situation is not expected to change until around 3:50 p.m. GMT. The cardinals who have gone on a lunch break at the St Martha’s House are expected to regroup to continue voting around that time.

Meanwhile, a large crowd had defied the morning rain as they gathered at St Peter’s Square waving the flags of various countries in solidarity with the nationality of the cardinals they wish will emerge as the next pope.

The papal electors are expected to remain in the Sistine chapel until one candidate gets up to 77 votes.

The longest conclave in modern history of the church took place in 1740 and led to the election of Pope Benedict XIV. It lasted from 18 February to 17 August- 181 days.

Fifty-one cardinals participated in the final ballot, four cardinals died before the end of the proceedings. This conclave is not expected to take that long as signs of early leaders are beginning to emerge.

The Italian newspaper, La Stampa Vatican Insider is reporting that most of the votes have been cast for Cardinals Scola, Bergoglio and Ouellet.

The Vatican spokesperson, Fr. Lombardi just confirmed that three ballots have been taken so far but without any candidate getting the required 77 votes.

The last time a pope was elected after three ballots was in 1939 when pope Pius XII was elected.

Pope Benedict XVI was elected on the second day after the fourth ballot. That of his predecessor, Pope John Paul II, lasted over three days and he was elected after eight ballots.