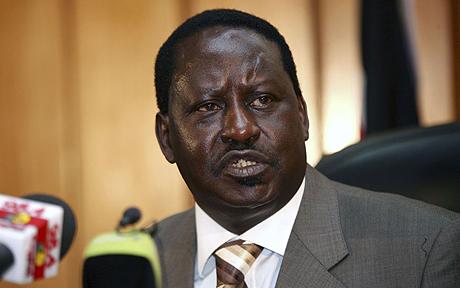 Kenya Prime Minister has issued the statement below on the declaration of Uhuru Kenyatta as the country’s president-elect.

In the statement, he explains why he is challenging the election in the Supreme Court.

He whoever advised Kenya to eschew violence, saying he trusted the Supreme Court to redress the injustice done to him by the country’s electoral body.

We again stand at a very pivotal moment in our history. We have created a new Kenya out of the ashes of the one that was nearly destroyed by the terrible violence which followed the tainted last election. It took five long years to rebuild this beautiful country, and foster reconciliation among those divided and traumatized by those events. Our people have passionately embraced an unprecedented new order of reforms and economic vibrancy that will deliver a more prosperous and equitable society, encapsulated in a new Constitution that is the envy of the world.

And so on 4th March we all watched with utter gratitude the massive turnout as Kenyans waited patiently amidst hours-long delays to fulfill their desire to vote for the people they want to lead them. Despite the hiccups the IEBC experienced in implementing a smooth and transparent run-up to Election Day, Kenyans were convinced that the IEBC would translate their faith in democracy into a completely credible election which would unite the country.

What Kenyans witnessed instead was the failure of virtually every instrument the IEBC had deployed for the election, The poll books, the servers, the telephonic transmission, the BVR – they all failed despite the billions spent on acquiring them. Two days after the vote, the electronic tallying was discarded and fresh counting begun afresh via a manual count.

That too turned out to be a flawed exercise in which, among other things, there was massive tampering with the IEBC Final Register of Voters. Voter registration numbers were reduced in our strongholds and added to Jubilee strongholds! To give just one example, Ndhiwa constituency had 61,339 voters listed in the IEBC Final Register. But in the votes and election results that IEBC announced, it indicated Ndhiwa had only 48,535 voters! At the same time other constituencies saw the numbers of registered rise.

In Laikipia North constituency, on Friday the IEBC announced the results of the Presidential vote there – I had 11,908, and the Jubilee candidate had 11,361. But the Laikipia North results had already been announced by the IEBC the day before! The result then was different – I had 11,596 votes while my opponent had 9,707. Where did these extra votes come from? This is not the time to point to other examples of rampant illegality.

There had been a massive public investment in the IEBC to ensure that this first post-2007 election would firmly entrench democracy and the rule of law. The commissioners criss-crossed the world to study how best Kenyans would have a credible election which would allow them to support their new President, whether they voted for him or not.

It is clear that the constitutionally sanctioned process of electing a new set of leaders to take us to the next level has been thwarted by another tainted election. This is not the IEBC that Kenyans and Judge Kriegler envisioned.

This crisis is not just about the IEBC. It is a crisis in the very workings of the faith that Kenyans have placed in their institutions to respect their democratic rights and the rule of law.

As I said repeatedly during the campaign, I would have readily conceded if IEBC had attempted to deliver a reasonably honest election. Or even if it had addressed the serious concerns the CORD team led by the Vice President formally presented to the commission three days. I only want to lead if Kenyans want me to. I have no other vested interest.

Both Judge Kriegler and ECK chairman Kivuitu acknowledged that it was not possible to know who won the 2007 election. We thought this would never happen again. It most regrettably has.

But this time we have a new independent judiciary in which I and most Kenyans have faith. It will uphold the rule of law, and I will abide by its decisions. I will therefore shortly move to court to challenge the outcome that the IEBC announced a few hours ago.

I want to appeal to all Kenyans to respect the rule of law and the Constitution of which they are so proud. Let the Supreme Court determine whether the result announced by IEBC is a lawful one. I am confident the court will restore the faith of Kenyans in the democratic rule of law.

Any violence now could destroy this nation forever. That would not serve anyone’s interest. Please therefore look upon each other as brothers and sisters whose national bond should not again be broken.

Flying Eagles to get N.3m match bonus each

I’m yet to decide whether to accept Gov. Akpabio’s gift – Tuface Idibia