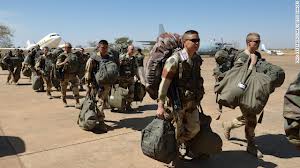 The French national is to e extradited to France.

A Frenchman fighting alongside Malian Islamists was captured in a fierce clash that killed 15 militants and wounded some 30 French soldiers.

French forces searching for al Qaeda-linked militants in the hidden valleys of the remote north of Mali are now deep in the Islamists’ sanctuary, France’s defence minister said on Friday.

A day after a visit to Mali, Jean-Yves Le Drian said the current phase of the eight-week-old French-led offensive was the hardest, as it required winkling the Islamist fighters out of entrenched positions in the Adrar des Ifoghas Mountains.

French soldiers killed about 15 militants this week after discovering a small army of jihadists in the Ametetai valley.

Some 30 French soldiers were wounded in the operation and a French national fighting for the Islamists was taken prisoner, Mr. Le Drian told Europe 1 radio on Friday.

“Now it’s a bit more difficult because we’re in the sanctuary,’’ Mr. Le Drian said. “We knew this part of Mali was potentially the sanctuary of AQIM (al Qaeda in the Islamic Maghreb), and we weren’t wrong.’’

“The search is continuing and as of yesterday afternoon had moved to the other valleys, because the whole territory has to be cleaned out completely,” he said.

The offensive, which began in January, has driven Islamist rebels from most of the swathe of northern Mali they had seized since April, but has failed to eradicate pockets of resistance in mountain hideouts and around Gao, the region’s largest town.

“We found them by the tonnes,’’ Le Drian said. “I hadn’t expected such amount of catch of arms from the insurgents.’’

He said a Frenchman among prisoners taken during combat would soon be extradited to France.

He said French forces still had to clear out northeastern Mali and secure Gao before they can begin to scale back and hand over operations to African troops.

“We are on the right path but until the entire territory has been freed, I remain cautious,’’ Mr. Le Drian said.