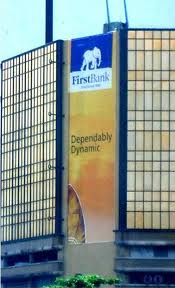 Bank manager, 4 others arraigned for robbery

A manager with First Bank Plc at Ilasa-Ekiti in Ikole Local Government Area of Ekiti State, Ayodele Asaba, and four others on Tuesday appeared before an Ado-Ekiti Magistrates’ Court for alleged robbery.

The police prosecutor, Curtis Enabulele, told the court that the accused committed the offence on May 24, 2012 at the Ilasa-Ekiti branch of the bank.

Mr. Enabulele told the court that the manager conspired with the robbers to rob the bank.

The robbers, he added, on the same date and place stole N7.833 million from the bank.

The prosecutor said the robbers, who were armed with dynamite explosives, unlawfully killed a police officer, Yinusa Yahaya, by throwing the explosive at him.

He said other policemen killed were Adeniyi Akeem, Kola Osanyigbayi and Emmanuel Kayode.

The prosecutor further said the robbers stole one Honda Accord Bullet car and Toyota Highlander Jeep, property of one Afolabi Janet.

Mr. Enabulele said that the offences contravened sections 319 (6,1) of the Robbery and Firearms (Special Provisions) Act Cap R11, Laws of the Federation, 2004.

The prosecutor, however, said he had transferred the case file to the Office of the Director of Public Prosecution for legal advice.

Counsel to the bank manager, Yemi Daramola, prayed the court to grant bail to his client, promising that he would be available for trial.

Magistrate Adefunke Ajibade, however, ordered that all the accused persons be remanded in Ado-Ekiti prison.

She adjourned the case to April 10 for further hearing.