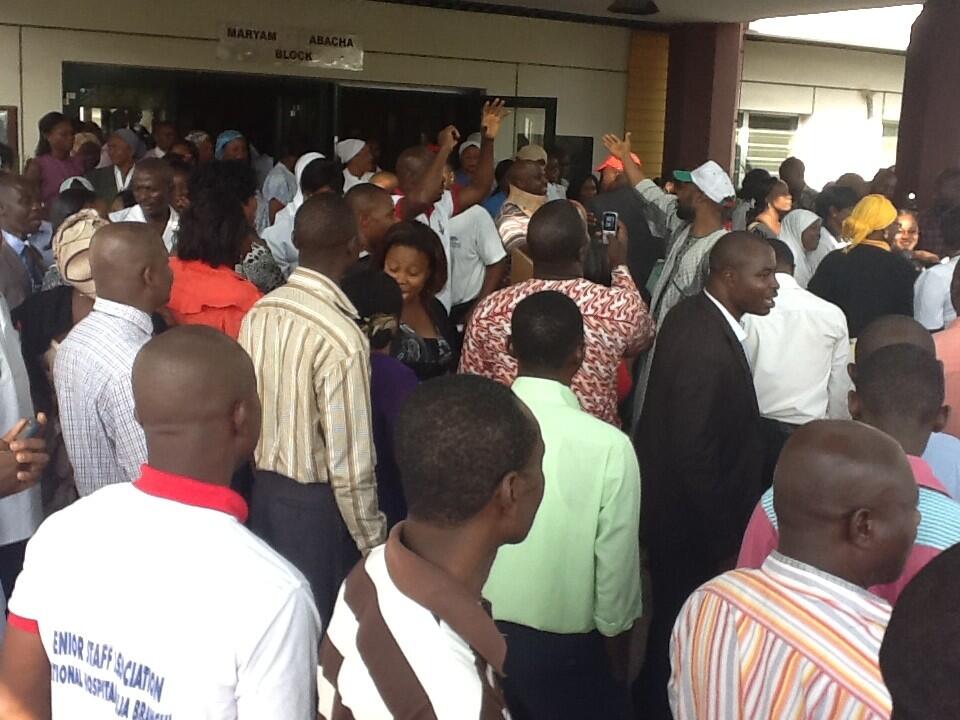 Doctors, nurses and other health workers during the protest. [PHOTO: Ajibola Oyewande]

Why Nigeria’s National Hospital workers are on strike

The hospital workers said the Nigerian government is reneging on an earlier agreement on workers welfare.

Three years after the Federal Government signed an agreement with workers of the National Hospital in Abuja, the government has not only refused to honour the agreement, but has stated its intention to renege on it.

This was disclosed by hospital workers- nurses, laboratory scientists, midwifes, etc. – who embarked on a three-day warning strike on Tuesday.

The staff embarked on a three-day warning strike to protest against the non-implementation of the revised condition of service.

The Chairman of the Senior Staff Association of the Hospital, Kilani Jelili, said that the warning strike would start from eight in the morning to 12 noon for three days.

The unions involved in the protest include the hospital’s senior staff association, National Association of Nurses and Midwifes as well as the Medical Health Workers Union.

Mr. Jelili said it was only in 2010 that a condition of service was approved for workers in the hospital but was yet to be implemented by the management.

“We agitated for it and we were given but to our amazement the management just told us that on 31st January 2013 that they could not implement the condition of service because they are grey areas,” the union leader said.

The workers’ leader said the demands of the hospital staff bordered on their welfare, as there is no welfare package for them.

“People are disenchanted, they are unhappy, they are angry that the management really does not care for us and that is why we said we must ask for what is our right. In fact even the welfare package they met on ground has been stopped.

“When you have a social event to do and you want to use the hospital vehicle, you have to pay as if you are an outsider. So what is the essence of working here if we cannot even enjoy some simple benefits? That is why people say we should ask our management to give us what is due to us,” he added.

The chairman, however, said that the unions were ready to negotiate as long as their demands would be met. He averred that the health conditions of the workers in the hospital needed to be good for them to be able to take care of patients effectively.

Mr. Jelili said that a meeting was held on Monday between the union leaders, management of the National Hospital, and representatives of the Federal Ministry of Health to consider the issue at stake.

Meanwhile, the Head, Management Information Service of the Hospital, Tayo Haastrup, has appealed to the various unions to wait for the outcome of the report of the meeting held on Monday.

He said President Goodluck Jonathan had directed the minister of health to look into the activities of the national hospital and that a committee had been set up for that purpose.

“Every one of us should wait for the outcome of the report of the committee that the minister has set up,” he said.

The hospital spokesperson said the president has asked the minister to supervise the activities of national hospital on his behalf; and that the hospital management reports to the health minister on its activities.

“So if in his own wisdom has set up a committee I believe we should all wait for the outcome of the report, so that they would give us a direction,” he said.