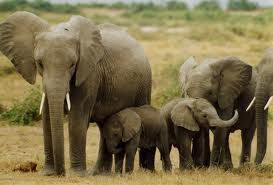 The forest elephants have tusk considered superior to that of savannah elephants.

Central Africa’s forest elephant population has declined by 62 per cent over the past decade, due mainly to poaching to feed Asia’s demand for ivory, a conservation group said on Tuesday.

“There is a crisis taking place in central Africa,’’ said Elizabeth Bennett, a vice president of the New York-based Wildlife Conservation Society, which compiled the first comprehensive study on forest elephants during 2002 to 2011.

About 62 per cent of all forest elephants in the region have been killed over the past decade, largely for their ivory, she said.

“The cause of this massive decline is poaching, partly for bush meat, but primarily for ivory, driven by increasing demand from the Far East,” Ms. Bennett said.

The study on forest elephants, a different species than Africa’s more numerous savannah elephants, was released at the 16th meeting of the Convention on International Trade in Endangered Species of Wild Fauna and Flora (CITES) hosted by Bangkok this week and next.

The escalating slaughter of African elephants is one of the key topics at this year’s meeting that has drawn about 2,000 delegates from the 178-member trade treaty.

CITES estimated about 25,000 African elephants were killed in 2011 and a similar number last year, most poached to supply East Asia’s market for ivory trinkets, tusks and specialised items.

The tusks of forest elephants are prized by Asian carvers over those of savannah elephants because they are harder, straighter and longer, Ms. Bennett said.

“For certain things such as musical instruments in Japan, they are favoured over savannah elephants,” Ms. Bennett said. “That’s one of the problems.”

The Wildlife Conservation Society estimates there are about 100,000 forest elephants remaining in central Africa compared with about 400,000 savannah elephants.