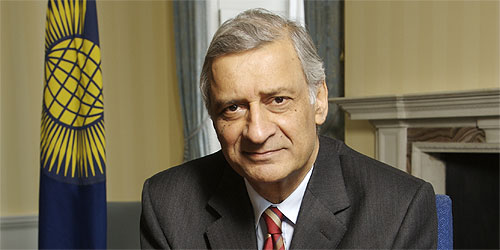 President Goodluck Jonathan on Monday in Abuja held a closed door meeting with the visiting Commonwealth Secretary-General, Kamalesh Sharma, during which a proposal for a visa free regime was discussed.

Mr. Sharma and members of his delegation were accompanied to the meeting at the Presidential Villa, by the Minister of Foreign Affairs, Amb. Olugbenga Ashiru.

Briefing State House correspondents after the meeting, the Minister of Foreign Affairs,  Olugbenga Ashiru, said issues bordering on trade and free movement formed the basis of the meeting between the President and Mr. Sharma.

He said as parts of plan to gradually introduce the visa-free policy, ahead of the November Commonwealth Heads of State and Government Meeting (CHOGM) in Colombo, Sri Lanka, “there is a proposal to exempt carriers of diplomatic and official passports from visa procurement.”

He said the gesture might be extended to members of professional bodies.

Mr. Ashiru said,  “We also discussed the issue of free movement to promote people to people contact within the Commonwealth.

“In the past, it used to be that holders of Commonwealth passports could travel within the commonwealth countries easily without having to go and queue for visas. We are now thinking for ways to ensure that we bring back this old tradition of the Commonwealth.

“Already, the council of ministers have recommended for approval at the next CHOGOM meeting in Colombo the exemption of holders of official and diplomatic passports within the Commonwealth from the requirement of a visa if they are travelling within the commonwealth.”

The Commonwealth secretary also told State House correspondents that they discussed wide-ranging issues of mutual benefit to the group and Nigeria.

He said, “We talked of what contribution can be made by the Commonwealth in the post-2015 Millennium Development Goals.

“There was also the issue of deep bilateral collaboration between the Commonwealth and Nigeria.

“This extends to the election commission that has been working for a very long time and the observers even in the last election. It extends to the software we keep and renew on debt management.”

According to Mr. Sharma, the Commonwealth is also ready to work with the Nigeria government in the area of public administration.

“So, I am meeting a lot of ministers. I had a meeting in the morning with the Ministers of Foreign Affairs and Finance and discussed many of these issues, especially as they relate to trade and liquidity, which are in the forefront of our membership,” he added.