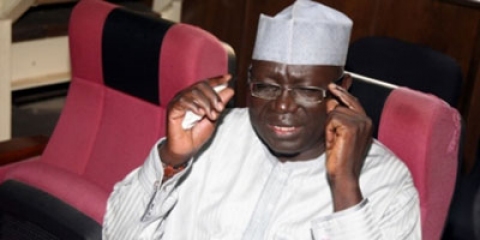 The convicted pension thief had a fit and eventually slumped in court.

The convicted pension thief, John Yusufu, slumped in the court room as trial commenced on Monday.

The lawyer to the accused, Theodore Maiyaki, had appealed to the court to grant his client bail on the grounds that the crime for which his client was being tried is bailable.

The counsel to the Economic and Financial Crimes Commission, EFCC, Rotimi Jacobs, opposed the application, saying Mr. Yusuf’s antecedent shows that he cannot be trusted in a bail situation.

Mr. Jacobs also argued that the accused person’s offence, felony, was weighty and as such should be denied bail.

The court, after listening to both sides, ruled that trial should go on while a date is fixed for ruling on Mr. Yusuf’s application.

Mr. Maiyaki asked that trial be adjourned for ruling on the bail application. The court refused.

The EFCC counsel proceeded to call on its first witness. As the witness testified, Mr. Yusuf went into an epileptic like fit.

He was then allowed to sit inside the dock. As he made to sit, he slumped.

The court held that the accused is not fit to continue with the trial and adjourned the trial to April 22.

His lawyer requested that he be allowed to visit his personal doctor. The court granted and directed the prison authority to allow his doctor attend to him.

Ruling on his bail application was thereafter fixed for March 11.

Mr. Yusufu had been convicted after he admitted that he stole about N3 billion pension funds. He was convicted and sentenced to two years each on the three counts he pleaded guilty to. He was, however, released on bail after paying N250, 000 on each of the three-counts as directed by the judge.

Dissatisfied with the ruling, the EFCC re-arrested Mr. Yusufu and is prosecuting him for failing to declare some of his asset as directed by law.