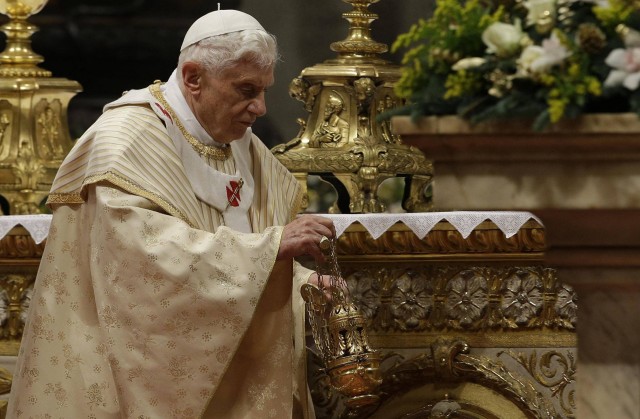 Will Benedict XVI be shadow pope after retirement?

After retirement today, Joseph Ratzinger will be referred to as ‘emeritus pope.’

Today, the reign of Joseph Ratzinger as Pope Benedict XVI ends. As he told Catholic faithfuls in St Peter’s Square, Vatican City, during his last official mass as the head of the 1.2 billion-member strong church, God called him to resign from his influential position to a life of prayer and meditation.

But theologians and Vatican analysts said the announcement by the Vatican on Tuesday that Pope Benedict will be known as “emeritus pope” suggests that he becomes a shadow pope.

The Vatican put to rest the confusion and speculation of what the pope will be called after he announced he was resigning(the first pope to willingly do so in about 600 years) when it announced that Benedict XVI will still be addressed as “Your Holiness.” He will also keep the white cassock associated with papacy. Meticulous as the church may appear in its laws; this is something it wasn’t prepared for- a reigning and retired pope.

Though the Vatican has dismissed fears that this may give raise to divided loyalties, Analysts say this may just be the beginning of a major political row in a church that is famed for washing its dirty linens indoors.

“With Benedict XVI, there is a risk of a shadow pope who has abdicated but can still indirectly exert influence,” Swiss theologian, Hans Kueng, told Germany’s Der Spiegel magazine last week.

Vatican spokesperson, Federico Lombardi, says any such fear is totally uncalled for. He told journalists that Benedict XVI himself settled for the titles of “Your Holiness Benedict XVI” and either “emeritus pope” or “emeritus Roman pontiff,” after consultation with other church leaders.

Other pointers to a possible clash of influence is that Benedict XVI after today, will be living just next door to the yet to be elected new pope as well as trusted secretary, Archbishop Georg Gaenswein.

Mr Gaenswein will be living with Benedict XVI at the close-by monastery being prepared for him as well as keeping his official position as prefect of the household of the new pope.

Mr. Kueng sees a conflict of interest in the making:

But Jesuit writer, James Martin, disagrees: “I was somewhat surprised that Benedict would still be called ‘His Holiness’ and would wear white, but it’s akin to the former U.S. presidents being addressed as ‘Mr President. It’s a mark of respect for the former office he once held.”

“Overall, I don’t think that after the conclave there will be any doubt about who the pope is, or who is in charge,” he said.

Last day in the office

Mr. Lombardi said Pope Benedict XVI will spend his last day as pope by meeting with cardinals in the morning. He would then fly by helicopter to Castel Gandolfo, the Papal residence in Rome where he would greet parishioners from the balcony. This will be his last public act as a pope.

At 8 p.m. when he officially ceases to be pope, the Swiss guards at the entrance of Castel Gandolfo will go off duty as their primary job of protecting the pope ends. Their job will be taken over by Vatican police, Lombardi explained.