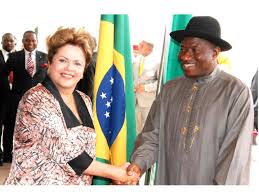 The Brazilian president was in Abuja over the weekend

Presidents Goodluck Jonathan and Dilma Rousseff of Brazil on Saturday called for an urgent reform of the UN Security Council to make it more democratic and reflective of the changes in the international architecture.

Both leaders made the call in Abuja when Ms. Rousseff paid a State visit to Nigeria at the invitation of the Nigerian president.

In a joint communiqué issued by both leaders after a closed-door meeting, they said that on-going effort at reforming the UN was a welcome development.

They noted that the reform would equip the global organization better to meet the current challenges in the maintenance of international peace.

The two presidents spoke highly of the friendly relations and cooperation between Africa and South America.

They also expressed their appreciation for the convening of the seventh Ministerial Meeting of the Zone of Peace and Cooperation of the South Atlantic in January.

The two presidents exchanged information about Nigeria’s candidature for election as a non-permanent member of the UN Security Council for the period of 2014 to 2015.

They also exchanged information about Brazil’s Ambassador Roberto Azevedo’s candidacy for the post of Director-General of the World Trade Organization (WTO).

They agreed in principle to consider favourably the candidatures, as well as other candidatures from both countries in the light of their excellent bilateral relationship.

The two presidents noted the importance of energy to the development and industrialization efforts of the two countries.

They restated their commitments to collaborate in the energy sector for a mutually beneficial partnership.

They, therefore, pledged to work together for the prompt implementation of the Memorandum of Understanding on cooperation in the field of energy, signed in 2009.

The MoU covers initiatives in the areas of power generation, transmission and distribution as well as the production and commercialization of bio-fuels.

The two leaders agreed to actively collaborate in the other sectors including agriculture and aviation.

They noted the importance of implementing Bilateral Air Services Agreement (BASA), and agreed that the facility of direct air links between the two countries would enhance trade between Brazil and Nigeria.

The leaders agreed to encourage exchange of visits by officials in the Defence and Security sectors with a view to boosting cooperation in these areas.

The two leaders expressed satisfaction with the steady growth of friendly relations and co-operations between Nigeria and Brazil in the past 56 years since the establishment of diplomatic ties in 1961.

Both sides expressed their readiness and strong commitment to expand cooperation in various fields and promote the growth of the partnership between the two countries in line with the principles of mutual benefits, mutual respect and mutual interests.

Ms. Rousseff who arrived at the Presidential Villa at about 11 a.m., was received by Mr. Jonathan, ministers and other presidential aides.

The visiting President inspected a guard of honour mounted for her, followed by a 21-gun salute before the closed-door meeting.