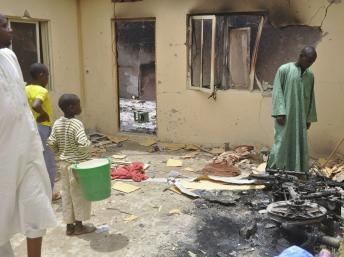 The violence in the north-eastern Nigerian state has been curtailed for now.

At least one person has been reportedly killed in Wukari, Taraba State, following violence that erupted in the town. Several houses were also burnt in the fracas.

A resident, who spoke to PREMIUM TIMES on the telephone, said that trouble started when a young Hausa man was seen carrying a hunting gun early on Saturday.

Some young men he met playing football on a field accosted him, leading to a minor scuffle.

“As a result of the scuffle, a bullet was mistakingly fired from the gun which wounded one of the boys and it led to a riot,” the resident said.

He claimed the victim, a Jukun, later died from the injury, which led to a major violence between the Hausa and Jukun community in the town.

The resident added that tension had been high in Wukari between the Hausa and Jukun community following an upheaval that occurred last December in nearby Ibbi Town where some persons were reportedly killed and property damaged before military intervention restored order.

Another resident said the military have been drafted to Wukari and have succeeded in curtailing the situation. He however added that the environment was tense.

Efforts to reach the spokesperson of the Taraba State Police Command were unsuccessful.

Five things you should know about new extremist sect, ANSARU