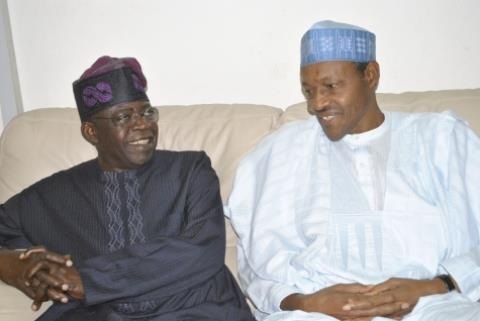 The merger, members of the new alliance say, is to protect Nigeria’s democracy.

The personal ambitions of a former Head of State, Muhammadu Buhari, and former Lagos State Governor, Bola Tinubu, will not threaten the ongoing merger talks between their parties and two others.

A member of the merger committee, Osita Okechukwu, said in Abuja on Thursday that the ambitions of the two political leaders as well as that of the former Kano State Governor, Ibrahim Shekarau, will not constitute a hindrance to the merger process, which has reached advanced stage.

Mr. Okechukwu explained that Messrs Buhari and Tinubu are preoccupied with reconciling different interests in the new party so as to achieve a common front that will confront PDP electorally, beginning with the governorship election in Anambra State in December.

“For them this thing is about the country. Nigeria is drifting dangerously into a failed state.

“So these patriots are saying that they are going to salvage this country and let personal interest go down the drain,” Mr. Okechukwu said.

Mr. Buhari’s Congress for Progressive Change, CPC; and the Action Congress of Nigeria, ACN, led by Mr. Tinubu announced their plan to merge with the All Nigeria Peoples Party, ANPP; and All Progressive Grand Alliance, APGA, on February 6.

The proposed party, if registered by the Independent National Electoral Commission, INEC, will be known as the All Progressives Congress, APC, the name it has already adopted.

Mr. Okechukwu, who said that APC might be registered in June, added that issue of the distribution of offices among the four parties in the merger talks is not on the card now until after registration.

“It was never discussed and will not be discussed, even party offices. The whole concentration of all the meetings I have attended as a merger committee member is construction of a national movement that will have broad appeal,” Mr. Okechukwu said.

“It is when they draw the constitution of party that they now know who is qualified to be the chairman of the party and who can go where. We have not come to that because there must be fairness in our thinking because without fairness we cannot talk about democracy.”

There is increasing suspicion that the ambitions of some of the leaders of the proposed party, especially Mr. Buhari to take another shot at the presidency, could truncate the merger process.

But Mr. Okechukwu waved the suspicion saying members of the party are focused on saving Nigeria’s democracy.

He stressed, “The most prominent thing that the members and supporters put ahead is to save the country, to save our democracy and even save our constitution which PDP has bastardized. So, the redemption song is to redeem the country because if there is no country there is no ambition to talk about.”

He argued that though the political leaders reserve the right to contest elections, the internal democracy in the new party would be strong enough to decide those to contest the elective positions in the country.

This, according to him, is to avoid the trap that the ruling Peoples Democratic Party, PDP, has fallen into.

The merger committee member said three committees have been set up to hasten the process of getting the party registered. The three committees- constitution, manifesto, legal and constitution compliance- were set up last Wednesday and would submit their reports in two weeks in order to ensure that the registration is achieved in June.

“What we did was to inaugurate the committees to harmonise and package a constitution for the party, package a manifesto for the new party and then harmonise all relevant legal requirement that will clear all the obstacles for the party’s registration,” he stated. “On or before June, the APC will be fully registered to operate as a legal political party in Nigeria. Then all the parties will cease to be parties,” said Mr. Okechukwu.

He enjoined other parties outside the APC fold to team up with the proposed party because “it (APC) is borne out of national consensus and collective rationality from bottom up.”