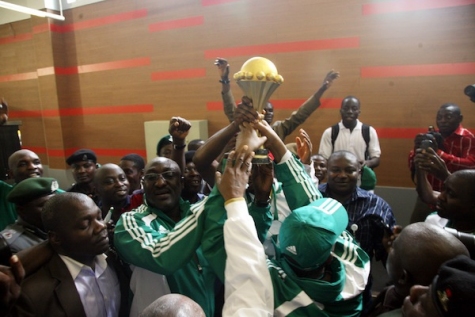 The Federal Government on Tuesday night opened the cash tap and doled out money in torrents to the victorious Super Eagles team to the just concluded African Cup of Nations championship in South Africa.

A largely underrated Super Eagles had on Sunday night defeated Burkina Faso by a lone goal to become the African Champions for the third time.

Each member of the team received the sum of N5 million from the Federal Government, in addition to national honour and choice land in the nation’s capital.

The Coach of the team, Stephen Okechukwu Keshi, received the sum of N10 million, a piece of land and national honours of Commander of the Order of the Niger (CON).

Assistant Coaches of the Super Eagles, Daniel Amokachi, Ike Shorunmu and two others went home with N5 million each, choice lands and national honours of Officer of the Order of Niger (OON).

Earlier, multibillionaires, Mike Adenuga and Aliko Dangote had given $1 million and N130 million respectively to players and officials of the team.

The government and the businessmen did not remember to reward members of the Nigerian Football Supporters Club who cheered the team to victory.

Members of the national team along with their technical crew and officials of the Nigerian Football Federation had arrived the Nnamdi Azikiwe International Airport, Abuja, at 3:15 p.m. to a tumultuous crowd of jubilant supporters and residents of the nation’s capital.

Meanwhile, the Honourable Minister of State for the Federal Capital Territory, Olajumoke Akinjide,  has commended the national team for making the nation proud at Africa’s biggest football fiesta.

Ms Akinjide said she was especially elated that the senior national team was led to victory by a Nigerian coach, Stephen Keshi and also assisted by Assistant Coach, Daniel Amokachi, a Nigerian.

She noted that the team, captained by Mr. Yobo, displayed a high level of commitment, dedication and patriotism.

According to the minister, the team’s victory at AFCON 2013 has restored the nation’s pride and positioned the country in its rightful place as “Giant of Africa in the area of football.”

“The AFCON’s triumph, which is coming after 19 years, is an indication of a better future for the country. We need to remain focus, discipline and determine. Nigeria is surely getting better in the areas sports and the economy.

“I express my heartfelt congratulation to the coach and our spectacular Super Eagles, for making Nigeria proud. I enjoin all Nigerians to learn from the strong determination, the will to succeed and patriotic zeal that brought victory to the team and the Nation,” said Akinjide, who oversees the FCT Department of Sports in the Social Development Secretariat.

The minister urged the team not to rest on its oars but to strive and work towards achieving a similar feat at the forthcoming FIFA Confederation Cup and FIFA World Cup in Brazil in 2014.

Between Adaobi’s America and her Nigeria, By Ikhide R. Ikheloa

Tackling the age-old question of leadership, By Garba Shehu