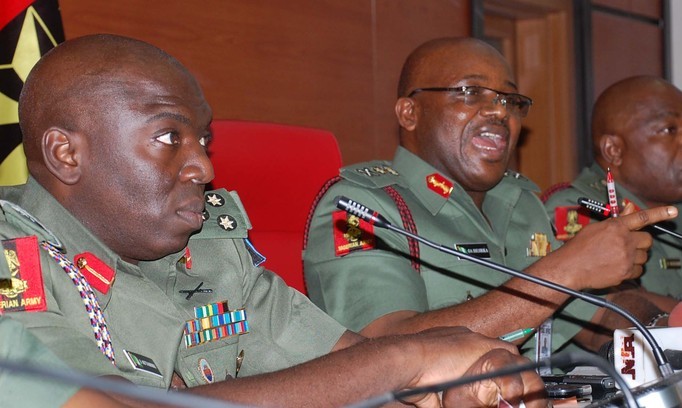 The Nigerian Army said it would not be dragged into politics.

The Chief of Army Staff, Azubuike Ihejirika, on Monday in Abuja, said that there was no lopsidedness in the recent promotions, postings and retirements in the Nigerian Army.

Mr. Ihejirika, a Lieutenant General, told journalists that there had been allegations of lopsidedness in the recruitment, promotion, retirement and deployment of some senior officers of the army in some national dailies and the social media.

“The army is a professional force and has laid down procedures for recruitments, promotions and retirements and does not discriminate against any person or group.

“The army focuses on merit in carrying out such exercises because it has a guiding principle,” he said.

The Army chief said the Nigerian Army does not promote or retire any officer without the approval of the Army Council.

According to Mr. Ihejirika, some of the factors considered include the promotion regulations, federal character, Harmonised Armed Forces Terms and Conditions of Service.

He said that each promotion was conducted by a board with members drawn from the geo-political and ethnic divides in the country, adding that all the proceedings of the board go through the Army Council for ratification.

“In 2011, we promoted 25 officers to Major-Generals and three out of the officers came from Kano State,” Mr. Ihejirika said, adding that he could not drop any of them because the promotion was based on merit.

The Nigerian Army chief said that the army must be protected and that political problems should be settled elsewhere. He warned that issues of ethno religious considerations should be down-played.

“I want to assure you that the army of today is not the type of Nigeria Army that dragged the nation into war in the 60s.

“Let me appeal to the press that the statement that the pen is mightier than the sword is apt and whoever has power should exercise it with caution,” Mr. Ihejirika added.