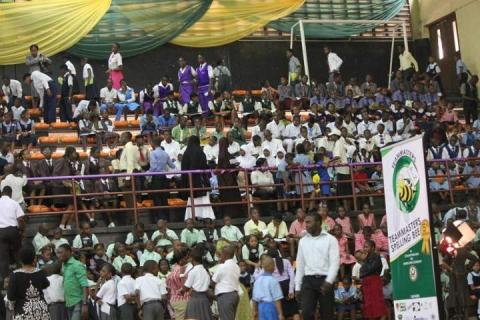 A total of 341 students participated in the competition.

A total of 145 students and pupils, on Thursday, qualified to the next stage of the annual Teammasters Spelling Bee.

About 341 students drawn from 105 schools across Lagos State participated in this year’s competition, organized in conjunction with the U.S. Consulate General, Lagos.

The winners of the competition would have the opportunity of becoming the U.S. Consular in Nigeria for one day.

They would also be sponsored to the United States to watch the Scripps Competition, an annual National Spelling Bee tournament.

“I want to win this competition. It is an opportunity,” said 9-year-old Chigbo Amaefule, from Dr. Soyemi Memorial Nursery and Primary School, after he qualified to the next stage.

In the Primary School category, 63 pupils out 165 made it to the next stage; while 39 out of 80, and 43 out of 96, qualified in the Junior and Senior Secondary School categories respectively.

A participant, Muiz Ademola, attributed his success to prayers.

“I was very anxious and then I prayed that the pronouncer will call what I will be able to hear and spell,” said Mr. Ademola, a student of Araromi Secondary School.

This year’s competition is the fifth edition of the tournament organized by Teammasters Limited, a Human Capital Development and Business Consulting Firm.