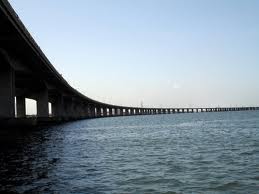 An engineer with the Federal Roads Maintenance Agency, FERMA, Oladimeji Abayomi, has said that installation of street lights on Third Mainland Bridge will be completed in April.

Mr. Abayomi made this known in Lagos on Thursday. He said the contractors handling the project are currently tracing the faults and clearing them.

He said that more lights would come on every week until all the faults are cleared.

“The contractor is on ground, the work is ongoing. They are tracing faults underground and laying cables.

“When you are tracing a problem, you may meet a bigger one that needs to be solved. Anytime from March or April the work would be completed,’’ he said.

He decried the power outages and outrageous billing system, which he said affects the lights on the street negatively.

Mr. Abayomi explained that the agency relied more on generators to power the lights from five different substations in the state.

He said the agency had to continue to supplement Power Holding Company of Nigeria with generators pending when its plan to change to solar energy materialised.

The Minister of Works, Mike Onolememen, had in October 2012, directed a team of engineers to tackle electrical problem on one of the expansion joints of the bridge.