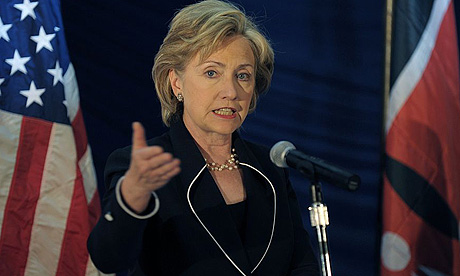 Mrs. Clinton’s appearance has been deferred for more than a month due to her ill health

The U.S. Secretary of State, Hillary Clinton, on Wednesday angrily defended her handling of the September 11 attack on the U.S. mission in the Libyan city of Benghazi and denied any effort to mislead people.

The attack by armed militants that killed U.S. Ambassador, Christopher Stevens, and three other Americans threatens to stain Mrs. Clinton’s legacy as Secretary of State.

It may also dent any hopes that Mrs. Clinton, who mounted an unsuccessful presidential campaign in 2008, may run for the White House again in 2016.

By tones emotional and fierce, Ms. Clinton choked up as she spoke of comforting the victims’ families and grew angry when a Republican senator accused the Obama administration of misleading the country over whether the Benghazi incident stemmed from a protest.

“With all due respect, the fact is that we had four dead Americans,” Ms. Clinton shot back as she testified before the Senate Foreign Relations Committee, an appearance delayed more than a month because of her ill health.

“Was it because of a protest or was it because of guys out for a walk one night who decided they’d go kill some Americans? What difference, at this point, does it make?” she said, making chopping motions with her hands for emphasis.

Ms. Clinton cast the incident as part of a long history of such violence as well as the result of regional instability since the Arab Spring of popular revolutions began in 2011.

Ms. Clinton is expected to step down in the coming days once her designated successor, Senator John Kerry, is confirmed by the U.S. Senate.

Republicans harshly criticized her, and President Barack Obama’s administration more generally, with one saying the Benghazi attack and the U.S. response displayed “woeful unpreparedness’’ for the events sweeping the region and another saying Mrs. Clinton should

Militants attacked and overwhelmed the U.S. diplomatic facility in Benghazi, Libya, on September 11 in a sustained assault.

An official U.S. inquiry concluded that the State Department was completely unprepared to deal with the attack, citing “leadership and management” deficiencies, poor coordination and unclear lines of authority in Washington.

Four lower-level U.S. officials were placed on administrative leave following the release of the inquiry, which did not find Ms. Clinton personally at fault.

A separate Senate committee report said the State Department made a “grievous mistake” in keeping the Benghazi mission open in spite of inadequate security and increasingly alarming threat assessments in the weeks before the attack.

Ms. Clinton was originally due to testify on December 20 but had to cancel after she suffered a concussion when she fainted due to dehydration.

Doctors later found she had a blood clot in her head and hospitalized her for several days.

Several senators, noting the ferocity of Ms. Clinton’s defense, said she appeared to have fully recovered. While many senators praised her four-year tenure as secretary of state, some Republicans were unsparing in their criticism.

Ms. Clinton at one point said that she had not seen requests from U.S. officials in Libya seeking additional security.

would have relieved you of your post. I think it’s inexcusable,” Republican Senator, Rand Paul, of Kentucky told Mrs. Clinton.

“It’s wonderful to see you in good health and as combative as ever,” Senator John McCain, an Arizona Republican, told Mrs. Clinton, who responded by laughing.

He then went on to say that he categorically rejected one of her answers and found others unsatisfactory.

While tarnishing Ms. Clinton’s tenure at the State Department, the controversy over the Benghazi attack also cost Susan Rice, the U.S. ambassador to the UN, her chance to succeed Ms. Clinton as secretary of state.

Republicans in Congress harshly criticized Ms. Rice for her comments days after the attack in which she said the incident appeared to be the result of a spontaneous demonstration rather than a planned assault.

Ms. Rice, who has said her comments were based on talking points from the U.S. intelligence community, eventually withdrew her name from consideration for the top U.S. diplomatic job.

“We were misled that there were supposedly protests and then something sprang out of that, an assault sprang out of that,” Senator Ron Johnson, a Wisconsin Republican, told Ms. Clinton, referring to Rice’s appearance on Sunday television talk shows.

“People have accused Ambassador Ms. Rice and the administration of, you know, misleading Americans,” Ms. Clinton said. “Nothing could be further from the truth.”

Ms. Clinton also appeared to try to subtly distance herself from Rice’s comments.

“The very next morning, I told the American people that heavily armed militants assaulted our compound, and I vowed to bring them to justice. And I stood with President Obama in

the White House Rose Garden as he spoke of an act of terror,” she said.

Ms. Clinton’s voice cracked as she spoke of comforting families who lost loved ones in the attack, the first since 1988 in which a U.S. ambassador was killed.

“For me, this is not just a matter of policy – it’s personal, she told the Senate panel on what is likely to be the last day that she will testify before Congress before stepping down as secretary of state.

“I stood next to President Obama as the Marines carried those flag-draped caskets off the plane at Andrews,” she added, her voice breaking as she described the ceremony at Andrews Air Force Base in Maryland when the men’s remains were brought home.

“I put my arms around the mothers and fathers, the sisters and brothers, the sons and daughters and the wives left alone to raise their children,” she said.

“I take responsibility,” Ms. Clinton said, echoing comments she first made in a TV interview on October 15 and stressing that she has accepted all of the recommendations of the

“Nobody is more committed to getting this right. I am determined to leave the State Department and our country safer, stronger and more secure,” she added.

Ms. Clinton is due to testify before a House of Representatives committee.